The Amazon share price was divided by 20 as of the close of trading on June 3 due to a planned 20/1 stock split designed to make the company’s shares more accessible to smaller investors. A share price of $2447 became $122.35.

A minimum stake in Amazon’s prospects dropping from almost $2500 to a little over $122 hasn’t, however, increased demand for the e-commerce and cloud computing giant’s stock. Amazon’s market capitalisation has lost almost 14% in the week since the newly split stock started trading.

But it’s fair to say the slide in Amazon’s valuation over the past week is not a consequence of the stock split. That was announced back in early March and the company’s valuation gained almost 25% between then and the end of the month. 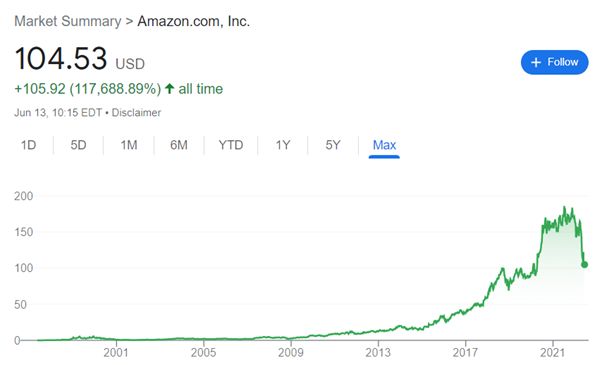 Since then equities, and especially the sub-category of high growth, tech sector equities that Amazon belongs to, have suffered from a broad-based sell-off. Investors have recently shunned risk with a focus on stretched valuations based on future revenue prospects. Rampant inflation, interest rate hikes and geopolitical tensions, and ruptures, are the front-line catalysts.

The result is Amazon is worth almost a third (31%) less than it was at the start of the year. That raises the question of whether it is now a buying opportunity. Are the company’s shares now discounted purely as a result of broader market sentiment and external macro-economic and geopolitical conditions? Or were they simply overvalued at the beginning of the year and have now returned to a more realistic level?

Fair value or undervalued? How analysts see the current Amazon share price after losing a third in 2022

A majority of analysts believe the Amazon stock has been oversold this year, even if slowing growth and external conditions do mean the company’s prospects look a little less rosy than they did some months ago. Morningstar’s Dan Romanoff, for example, lowered his fair value estimate for Amazon’s share price in late April from $4100 to $3850.

He recently reiterated that as his continued assessment of fair value, dividing it in 20 to reflect the recent stock split. He now sees fair value for the stock as $192.5, which is significantly more than the current trading level of around $104.50. That means Amazon stock is currently over 45% off its fair value, as judged by Romanoff.

That leaves plenty of potential upside once market sentiment turns positive again and would suggest investors are currently being offered a real bargain. But what does Romanoff base his opinion of fair value on?

He sees Amazon’s biggest strength as the continued rapid growth of the company’s AWS cloud computing unit. It is the market leader by some distance in a growing market that is expected to continue to see double digit annual growth figures for some time to come as enterprise workloads are shifted to the cloud.

Points of concern are a second straight year of contraction in first-party sales (products sold directly by Amazon on its e-commerce platform rather than those sold by third-party vendors using the platform) and e-commerce margins. The latter have been hit by inflation, excess labour and excess capacity. In its latest full-year trading report, margins came in at the bottom of the forward guidance range and below the expectations of most analysts.

Romanoff sees profitability “challenges” as persisting for the next few quarters and possibly into 2023.

Despite the challenges all retailers, bricks-and-mortar and e-commerce, have been facing as a result of inflation and continuing supply line issues, Amazon’s first quarter revenue grew 7% year-on-year to $116.4 billion, which was at the top of the forward guidance range. The company also noted it sees little evidence so far of a drop in consumer spending despite inflation and geopolitical and economic concerns.

Subscription services and advertising growth slowed to a still healthy 11% and 23% respectively and AWS’s growth was an impressive 37%.

The Motley Fool’s Adria Cimino is similarly optimistic about the potential upside for Amazon’s share price once a stock market recovery sets in. He sees the issues the e-commerce side of the business has been struggling with and which weighed on first quarter earnings as almost exclusively external – inflation and supply chain snarl-ups.

He also believes the fact that they have re-focused the company on the elements it can control like productivity and fulfilment network efficiency as positive for long-term cost control and competitiveness. He sees the continuing popularity of Amazon’s Prime subscription service as key. Exact member numbers are not reported quarterly but stood at 200 million in 2020 and the company has regularly spoken of welcoming “millions of new members” since. Subscription revenues, as mentioned, were recently reported as showing 11% year-on-year growth.

Cimino is particularly enamoured of Amazon’s cloud computing prospects, with AWS’s current strong performance looking like it can be maintained for years to come, providing the group’s engine of growth. Despite huge overall growth in the cloud computing market and rivals like Microsoft’s Azure and Google Cloud Platform investing billions in their own offerings, AWS has maintained a market share of between 32% and 33% over the past few years.

The fact that AWS also accounts for more than 70% of the group’s operating income means its continued growth will be far more influential than that of the e-commerce business over the next several years.

Finally, Truist Securities analyst Youssef Squali recently pointed out on CNBC that Amazon’s spare capacity issues, the result of a big investment in warehouse space over the pandemic (it was almost doubled) will give it a big competitive advantage once absorbed. He expects that to take around a year and investors able to look beyond the near term squeeze on margins to see great value in the company’s current share price.

He also highlights the fact that at its current share price Amazon is trading at around x10 cash flow, which hasn’t been the case since around the time of its IPO 20 years ago.

There are no guarantees the Amazon share price will rise from its current levels in the near term. It could quite conceivable sink even lower if overall market sentiment remains sour.

But while nothing is set in stone, the company does look far better value now than it has for many years. For any investors yet to gain exposure to the stock, perhaps worried about a stretched looking valuation over the last couple of years, its current price could represent an excellent buy-in opportunity. Existing investors still confident about Amazon’s overall longterm prospects might also see an opportunity to top-up their holdings. Especially now a single share costs just over $100 compared to over $2000 until June 3.