Property prices and sales might be stagnating and falling in parts of the country, real estate agencies in trouble and buy-to-let investors with investment properties leaving the market but the UK’s listed housebuilders appear to doing just fine.

Yesterday Bovis, the regional housebuilder that just two years ago was hit by complaints over its standards of customer service and the construction quality of its homes, forecast record profits for 2018. In a trading update ahead of its February release of official full year results, Bovis’s new chief executive Greg Fitzgerald announced that the company expected profits to come in well ahead of analysts’ expectations for £165 million.

Having been in the job for 18 months now, the leap in profits from 2017’s £114 million, at a time the market was still buoyant, is vindication for Fitzgerald’s leadership after he was tasked with repairing Bovis’s reputation following the resignation of predecessor Dave Ritchie. Fitzgerald has, however, put his faith in quality over quantity in the medium term, revising the company’s new builds target down to 4000 homes a year by 2020 from 5000 to 6000.

Bovis’s strong performance mirrors that of other UK housebuilders in recent months. Persimmon followed the Bovis announcement today with its own upbeat trading update. Annual revenues of £3.74 billion represent a 4% improvement on 2017 figures with completions also showing growth of 3%. Average selling prices have been announced as 1% higher and forward sales for 2019 up 3% indicates that the Brexit effect on the UK’s property market is, at least for now, being managed by housebuilders.

Last week Taylor Wimpey also confirmed to markets that it was on course to meet its own 2018 targets, resulting in a 4.1% boost to its share price and a ripple effect that saw the share prices of other housebuilding peers jump.
The sector has been one of the most battered by Brexit-induced investor negativity. Despite a recent recovery, the FTSE 350 Household Goods & Home Construction index is down well over 10% since late September 2018. 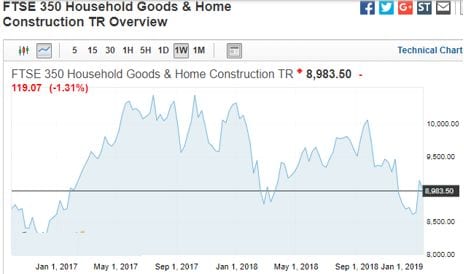 In 2017 the index outperformed the wider market by around 30%. Many analysts believe the sector’s currently depressed valuations leave room for considerable upside when Brexit uncertainty begins to ease. Of course, given the current state of affairs around Brexit and equities markets generally, that could mean further losses for the share prices of UK housebuilders in the near term. However, as a longer term bet, the sector currently looks attractive for those investing online with longer time horizons. If valuations are further hit that argument will strengthen further.

Opportunity For Quick Profits On Investment Properties While...

Buy-To-Let Investors Need To Be Aware Of April...

How to buy a house at auction for...