Is The Rationale Behind Emerging Markets Investment Broken?

For 3 decades it has been an accepted rationale that a ‘balanced’ and ‘diversified’ long term investment portfolio should have an allocation to emerging markets – the broad international sweep of capital markets in either developing economies or those whose development accelerated from the 1980s onwards and where capital markets are generally smaller and considered less ‘mature’.

Emerging markets have traditionally been more volatile, as are the currencies equities are denominated in, and standards of corporate governance less reliable. But GDP per capita and average incomes rise at faster tick than in developed countries and companies are starting from a lower base camp. The former increases the risk profile and the latter offers the potential for higher returns. The investor rationale for well-diversified exposure to emerging markets has always been that higher short term volatility was compensated by higher long term returns.

The risk factor also means emerging market equities are generally, within the context of the different common price to earnings ratios investment analysts apply, much cheaper than comparable companies listed on developed market stock exchanges. This means the theoretical potential for more upside.

And so, from the largest institutional investors in the world to small, private investors who informed themselves on investment theory and portfolio construction, broad-based investment portfolios have dutifully made room for an allocation to emerging market stocks. The classic 20-15-year horizon model portfolio would be expected to make room for a 20% to 30% allocation to emerging markets. That is, again if following the classic ‘model’. 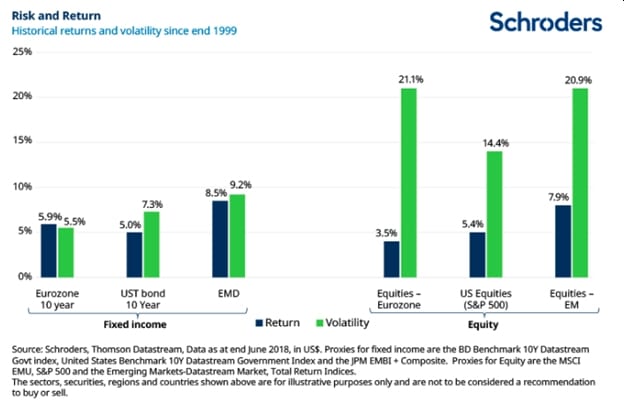 The rationale has always been that while an investment portfolio has a ‘growth’ rather than capital preservation target, the higher risk/higher return ratio offered by emerging markets has a place. The graphic above, published in financial and investment markets media City A.M., bears that out. The chart on the right shows the average annual volatility and returns of equities markets from the Eurozone, USA and emerging markets between the start of the current century and 2018.

But over the past couple of years, things have started to change. More and more investment managers and analysts are questioning if the role of emerging markets in an investment portfolio, at least in the traditional format, is still justified.

The reasons why doubt is being sown are multifaceted but boil down to a less certain outlook for the continued outperformance of economic growth of emerging markets compared to developed markets. But let’s break down why that might be the case.

The Globalisation Cycle Is Turning

Arguably, but not by many, the most influential factor in the economic growth rates of emerging market economies of the past several decades has been the trend towards globalisation. From the late 1970s on, developed market corporations and companies began to move large parts of their labour intensive operations to parts of the world where labour costs were significantly lower. Manufacturing and heavy industry being the two main sectors to follow this pattern of mass migration.

Local companies that were either part of the supply chain for these multinationals or catered to the newly formed levels of consumer classes made up of wealthier blue and white collar employees sprouted like mushrooms. Major infrastructure projects including factories, roads and ports were underway and maintained momentum. International companies

But globalisation is now flattening and showing signs of moving into reverse. Donald Trump’s ‘America First’ trade and foreign policies, especially its ongoing trade war with China, are the most obvious example of a change of strategy away from outsourcing as much as possible to cheaper parts of the world. But there is a wider global trend towards more inward-looking economies in the most developed parts of the world.

The Flow Of ‘Easy Money’ Is Slowing

The impact of the turn of the globalisation cycle has been offset to an extent by the high levels of liquidity that years of developed markets quantitative easing has injected into financial markets. But there are fears the emerging markets slowdown will become more pronounced as that liquidity dries up, as it inevitably must.

The USA is already well into an ongoing process of tapering its money printing strategy of the years following the international crisis. In Europe and Japan quantitative easing is ongoing but can’t be a ‘forever’ monetary policy. No one really knows how badly international financial markets will suffer from the withdrawal of that life support but some kind of shock can be expected. And emerging markets are likely to take the brunt of the blow of any major contraction of the international appetite for risk.

China’s Rate Of Growth Is Slowing

Since the 1980s China, by far the largest of the emerging markets economies, has been the engine of global growth. The huge leaps forward the country has made in growing its GDP and the unending stream of infrastructure projects, many of them colossal, has driven global demand. China’s appetite for commodities has been especially voracious – a particular boon to other emerging market economies which, on average, are more closely connected to their commodity exports than the more service-economy centric economies of developed nations.

Despite the fact that China’s economic growth has been slowing since the international crisis, it has still been the catalyst for the last three international growth cycles in 2009/10, 2012/13 and 2016/17. But the world, and especially other developing economies, may no longer be able to rely on Chinese growth. Despite the huge wealth of the Chinese economic elite and the rise of a middle class, the rate of GDP per capita growth has been showing signs of entering a new, more modest phase earlier than many economists hoped.

Across the board, China, outside of the middle classes and elites that are concentrated in its major towns and cities, has not fully evolved into a consumer society. By the end of 2017, despite the huge gains, Chinese GDP per capita was still slightly trailing that of Brazil at $8826.99 to $9821.41.

China’s economic growth is not only slowing. It is also less reliant on imports than it once was – particularly those from other emerging markets. Overall, the country’s investment has dropped from 48% of GDP in 2011 to less than 45% in 2015. It’s a trend that looks like continuing. Investment is also focusing more on services and less on infrastructure. That’s having a knock-on effect on the economies of commodities-driven economies across Asia, South America and Africa.

There are also warning signs for China’s internal economy. Non-financial sector debt has swollen to over 235% of GDP from around 135% before the financial crisis. Credit is also no longer powering increased productivity as it did. The capital invested for each unit of Chinese output has increased by around 66% since the turn of the century. Chinese businesses are, as they have been for 30 years, reliant on credit and subsidies to grow. But the returns derived from credit have fallen steadily. There are fears China’s credit dependency is a ticking time bomb.

A falling rate of productivity gains is not restricted to China and is blighting the majority of the emerging markets economies. They have largely failed to take enough of an advantage from the boom years to transition into consumer economies and are still heavily dependent on direct foreign investment – which is dropping.

Corporate debt levels are a problem across the board. Two decades ago total corporate debt in emerging markets, excluding the financial sector, stood at 60%. At the end of March 2019 it was 93%.

Much of the blame for failing to make hay while the sun was shining can be laid at the feet of corrupt or incompetent government over the years. There has been a lack of consistent development towards political maturity, which has hindered the development of judicial and economic maturity. There is a feeling that there has been a backslide in many of the emerging markets countries. That’s particularly notable in some of the biggest, such as Turkey, Brazil, Mexico and Argentina.

Is There A Future For Emerging Markets As An Asset Class?

The belief that the economies of emerging markets would eventually, over enough time, converge with those of developing markets has weakened in recent years. There is now a school of thought amongst analysts that the past 20-30 years of emerging economies sustaining growth rates higher than those of developing markets may prove to be an exception rather than the rule it was once assumed to be. There hasn’t been enough structural reform or gains in the transparency of institutions and in many cases there now appears to be regression in those areas.

Growth rates across many of the emerging market economies are dropping below those of developed economies. And for others, China included, it looks like it may be heading in that direction. If economic growth rates are not significantly higher than in developed markets, EM company valuations will not, on average, increase more than those in developed markets either. With volatility and risk levels still higher, why would investors bother? Many are asking that very question.

Without a return to growth, the catalyst for which is not currently immediately apparent, the status quo or further regression could mean the end of the rationale for emerging markets exposure.

As Emerging Markets Diverge So Does The Flow Of Capital

But the emerging markets group is so diverse that there is inevitably no single broad brushstroke that covers them all. Some emerging markets are doing well. Vietnam is one example. The country, which also has a communist government, is gaining from the shift of international investors away from China as labour costs rise and new U.S. tariffs and other trade restrictions bite.

India, The Philippines, Indonesia, Malaysia and Thailand are all other large, populous south Asian economies developing from a still lowly base that are expected to show strong growth rates over the next decade. Chile and Poland are further examples of economies that appear to be moving in the right direction for now.

Perhaps the most likely evolution of emerging markets investment is a change of tact away from treating such a diverse group of economies as one homogenous mass. Capital is likely to become more discerning and choose its flow into emerging markets in a way that is more akin to how it treats developed markets – individually or in tighter geo-political groupings than has historically been the case.

For those emerging markets where productivity gains have fallen off a cliff edge and genuine political and institutional reform are failing to take place, the immediate outlook doesn’t look especially rosy. But there is still hope. Technology, particularly the spread of internet access, demographic trends and urbanisation, hold the potential to reverse the fortunes of struggling emerging markets and help see them return to growth.

In the meanwhile, international capital is looks increasingly likely to shun poorly performing emerging markets. To do so, it will have to withdraw from broad based funds and indices, like the MSCI Emerging Markets index, which directly controls around £1.6 trillion in capital and another £9 trillion indirectly. A new home will be found either back in developed markets or in more targeted indices and funds that break the emerging markets asset class up and allow capital flows to rewards strong performers and ignore the weak.

That might prove to be the wake-up call some emerging markets need to return to growth – this time sustainably. It could also result in a long-term regression towards a more fractured global economy of the haves and have nots, putting an end to the theory of global convergence of affluence.

For investors, the challenge is to make their own judgement call on which of those emerging markets scenarios is most likely to play out over the next 1,2 and 3 decades.