Is the Uber share price finally poised for sustained growth?

Since debuting on the NYSE in May 2019, life as a public company has been tough for Uber Technologies, the ride-hailing and food delivery app company. Once the most highly valued start-up in history with a pre-IPO private valuation that peaked at $76 billion, Uber floated with a market capitalisation of $82.4 billion.

That was at the bottom of its proposed range with analysts valuing the company at $120 billion at one point during the lead-up to its IPO. However, after the tech company had revealed the scale of the losses its rapid expansion ahead of its stock market debut, enthusiasm waned. 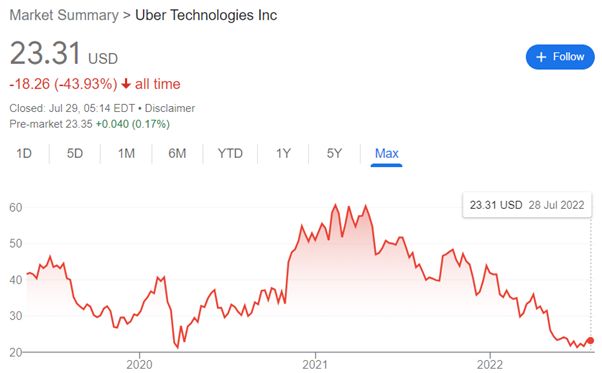 Unfortunately, even the more conservative final IPO pricing of $45-a-share wasn’t enough to prevent Uber from setting the record for the biggest ever first-day dollar loss in Wall Street’s IPO history. Uber finished its first day as a public company worth around $69 billion. Three years later, despite a boost during the pandemic as food deliveries rose briefly driving the share price to above $60, the company currently trades at $23.31 a share for a value of $45.77 billion.

Uber’s share price has fallen 47% in 2022, suffering from the general market punishment high growth, low-profit tech stocks have been subjected to this year. But from its current relatively lowly position, analysts are finally starting to become optimistic about Uber’s potential for sustainable future upside.

Is Uber now worth considering as a long-term investment at its current valuation? Let’s take a look.

Uber launched in 2009 as the first really significant example of the ‘gig economy’ business model that would subsequently spawn not only ride-sharing rivals like Lyft but also the likes of Deliveroo, GrubHub and DoorDash. Uber’s concept was fresh and ingenious, creating a scalable peer-2-peer business run on technology that allowed anyone with a private car to moonlight as a taxi driver whenever they wanted to. For as little or as much time as they wished daily, weekly and monthly.

Consumers loved the lower prices Uber’s lack of overheads, such as fixed salaries, insurance and pension contributions and logistics hubs allowed its army of gig economy drivers to offer passengers. Licensed taxi drivers and the companies they worked for didn’t. Some cities and countries saw taxi driver unions and lobbies push back hard against Uber’s presence but the company continued to expand rapidly across the globe.

Uber’s ultimate goal has long been to eventually phase out gig economy human drivers for fleets of even cheaper autonomous vehicles able to transport passengers anytime, anywhere. And without having to split the fair with drivers. But in the meanwhile, the ultra-low-overheads pay-as-you-go gig economy model looked like the perfect compromise.

In 2014, Uber launched the takeaway and groceries delivery service UberEats, adding another stream of income for both the company and its freelance drivers. There is also now a B2B service targeting companies under the Uber for Business brand. And in 2017, Uber Freight was added to the group. Another app-based middleman service, Uber Freight is targeted at the disruption of another hugely valuable industry by matching shippers who need loads hauled with available truck drivers. And selling spare capacity in trucks going in the right direction.

Uber now operates in over 10,000 cities in 72 countries, has 115 million monthly active users taking 19 million rides daily, and has paid out a cumulative $180 billion to passenger and delivery drivers.

Uber’s greatest challenge has always been balancing the rapid global expansion it believes is necessary to achieve both the economies of scale its low-margin business needs to be attractive to investors and competitive with the upfront losses that has involved.

The company has always been loss-making and the Covid-19 pandemic came along just as there was hope it might finally tip into profitability on a net basis. The pandemic boost to UberEats was welcome but nowhere near enough to compensate for the loss of much of the ride-hailing business for two years.

However, Uber actually managed to cut its losses in 2020 after haemorrhaging $8.5 billion in 2019. Laying off 6700 staff, closing 45 offices and selling off non-core businesses such the self-driving division trimmed losses by 20% to $6.8 billion. Cash burn, or operating cash flow was minus $2.75 billion in 2020 but dropped to minus $445 million last year.

But another huge loss, this time for $5.9 billion, was posted for Q1 this year, even if most of it was down to a slump in the value of equity holdings in Didi, a Chinese ride-hailing and hire car company, and Grab, the Singaporean ‘super app’ company that offers a similar range of services to Uber, plus financial services, in South East Asia. Between them, those two stakes accounted for $5.6 billion of the loss which does suggest Uber is again not far from reaching profitability.

Is the only way up for Uber from here?

An increasing number of analysts now believe that having survived the pandemic and steep tech and growth stocks sell-off this year with enough cash still in the bank to push on, and wait for better market conditions to sell its stakes in Didi and Grab, things are now looking up for Uber.

Its heavy investment and losses over the years have left it well positioned as a leader in its main verticals – mobility, delivery and freight. The pandemic forced the company into becoming much leaner and it should be able to cope reasonably well with current inflationary pressures, passing higher costs onto end users of its services.

The consensus rating of 28 analysts covering the stock is that it is a ‘strong buy’ and an average 12-month price target of $46.54 suggest a realistic upside of around 100%. Even the lowest price target of $27 would mean share price gains of almost 16% in the next 12 months. 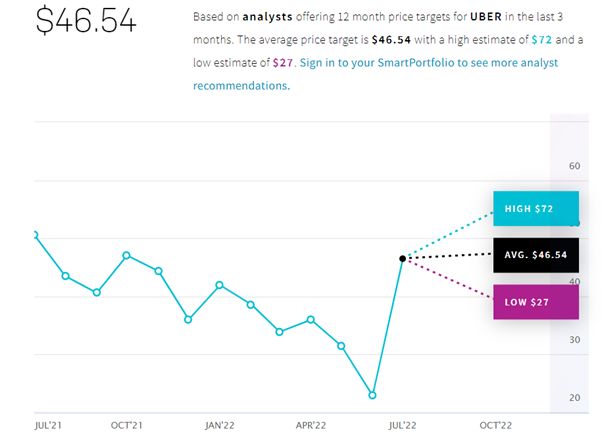 While there are never any guarantees a given stock will prove a winning investment, there is very credible evidence to suggest Uber may have reached its low. However, market conditions are currently difficult and the ongoing cost-of-living crises brought about by high levels of global inflation do represent a risk.

But with the company’s Q2 results to be released next week a positive report for the quarter could mean Uber’s share price has already bottomed out. And even if that isn’t the case and market conditions continue to weigh on the stock for several months, the long-term prospects for the company from here on look promising.