Home Stock & Shares Is up the only direction for Rolls Royce share price after £4 billion loss?
Stock & Shares

Is up the only direction for Rolls Royce share price after £4 billion loss?

“The worst is over”, said Rolls-Royce this week as the Derby-based engineering giant announced a £4 billion loss for 2020 and informed investors it is still burning through £10 million a day. It’s fair to say it’s been a brutal 12 months for the maker of Airbus and Boeing jet engines thanks to the aviation industry it relies on for much of its income for having its wings clipped.

With much of the world’s fleet of passenger aircraft grounded last year, depriving Rolls of lucrative maintenance contracts as well as sales of new engines, the company’s revenues dropped 24%. The rest of the huge losses resulted from restructuring costs coming from the decision to slash almost a third of its civil aerospace workforce adding up to 9000 jobs. One of charges to down-valued assets also took their toll.

In total, £4.2 billion in cash escaped through the holes last year. In early October the Rolls-Royce share price dipped to under £3.90 – its lowest lever since 2003. While it has since recovered to £11.38, the share price is still 50% down on where it was immediately before the coronavirus sell-off that unfolded last February and March. And over 65% down on its levels of early 2019. 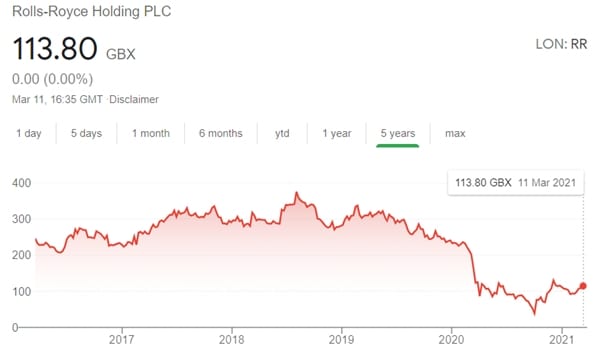 If the company is right and the worst is now behind it, investors were this week informed cashflow is expected to turn positive again in 2022 due to disposals and the resumption of mass civil aviation, does that mean the only way is now up for the Rolls-Royce share price?

A lot depends on how much cash is haemorrhaged this year while things slowly start to get back to normal. Especially the pace at which civil aviation returns to something approaching pre-pandemic levels. Rolls-Royce normally makes over half of its total revenues from suppling engines for long-haul passenger jets like the Boeing 787 and Airbus A350. Maintenance contracts, more lucrative than the sale of the engines themselves which are discounted in exchange for maintenance deals, are tied to flying hours. Which means jets have to be in the air for much needed cash to start flowing back into Rolls.

Over the first two months of 2021, blighted by the return of lockdown and travel restrictions across Europe and North America, the flying hours Rolls-Royce relies on were 40% below usual levels. It expects that to recover to just 55% over averages over the whole of 2021. That means Rolls-Royce expects to burn through another £2 billion in cash this year. Most of it over the first half of 2021 with hopes that cash flows could break even from the early summer on.

By 2022 the company estimates engine flying hours will be back to 80% of 2019 levels. That, it is hoped, will drag Rolls-Royce back into the black, with cash flow positive to the tune of £750 million. Chief executive Warren East attempted to reassure with:

“After a year like none other, the worst is well behind us and we can see a path to the future.”

Rolls-Royce has access to enough cash to get through to 2022 after a steeply discounted £2 billion emergency recapitalisation last autumn. £2 billion in bond debt was also issued, which in turn provided access to an additional £1 billion in loans and overdraft facilities.

Investors may say the current Rolls-Royce share price as an opportunity. However, the question is if the worst is genuinely now behind the company, at least in terms of its market valuation? Or will further heavy losses this year see more pain before an eventual recovery takes root?

With most of the strong data and positive vaccine news now priced in, the... END_OF_DOCUMENT_TOKEN_TO_BE_REPLACED

The profit-taking behaviour was also observed in the trading activity as daily trading volumes... END_OF_DOCUMENT_TOKEN_TO_BE_REPLACED