The ITV share price has gained almost 5% in morning trading today after the terrestrial broadcaster announced the decision to furlough around 15% of its staff. The action was taken to cut costs after advertising revenues, which the company relies on, plunged by 40% over April. That’s pushed ITV into a target of trying to cut costs by double its original target by the end of the year – £60 million up from £30 million. 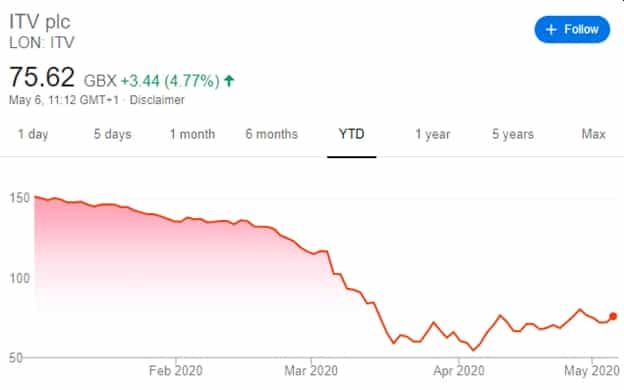 In a trading statement to investors, FTSE 100 member ITV announced a 42% drop in advertising revenues for April as well an 11% drop in sales from its studio, due to the forced halt of most productions under social distancing rules.

The company declined to offer forward guidance for the current quarter, its usual practice, citing the uncertainty of the current situation as meaning doing so would be largely meaningless. Stock market analysts, however, believe advertising revenues could fall by as much as 55% of the second quarter to the end of June.

Across the board, it is expected that companies will spend around 20% less on television advertising over 2020 compared to last year. Figures come from research conducted by the Advertising Association and industry body WARC.

Last year just under 50% of ITV’s total revenues came from advertising sales, with the company’s studio productions accounting for most of the rest. First quarter revenues were roughly in line with estimates, with a 7% drop to £694 million and studio turnover falling to £342 million to £385 million over the same three months last year.

Salaries have been announced as frozen, executive pay cut and new hiring suspended in an effort to brings costs under control in an environment of slumping revenues. The studio’s production budget has also been scaled back by £100 million and the dividend committed to on the basis of last year’s performance withdrawn. £150 million in pension payments that were due to be paid in June have also been delayed until the second half of the year.

On a positive note, ITV has said that some productions will be able to be safely restarted in coming weeks. However, its hugely popular flagship reality TV show Love Island will not be among them, with social distancing rules making the format impossible. That’s a major blow after the show generated an estimated £80 million last year.

Lockdown has been a boost for Britbox though, the streaming service launched last year in partnership with the BBC. ITV said subscription levels had shown “good growth”.