JD Sports, the FTSE 100 sportswear retailer, has entered exclusive talks with Debenhams that is hoped could save the department store chain. If the deal goes through, thousands of retail jobs could be saved in the run-up to the Christmas period. It is believed the JD Sports interest is in acquiring Debenhams as a whole business, rather than to pick off more attractive pieces of the troubled retailer. 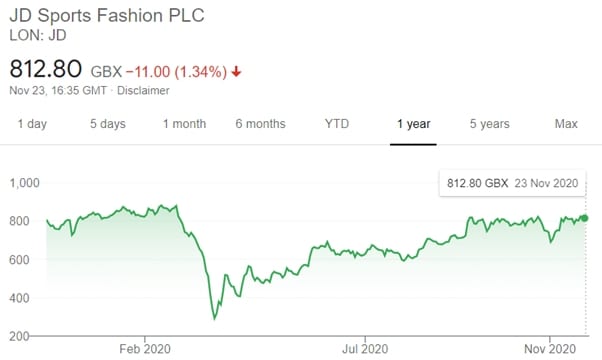 JD Sports is reported to have already entered exclusive negotiations with Debenhams’ adviser Lazard and administrators FRP. Debenhams, which employs 12,000 staff and runs 124 stores, fell into administration in April – its second time in just 2 years. Optimism that Debenhams would find a way to survive as a business had been receding. And while there is no guarantee the talks will succeed, there is quiet confidence that a willingness on both sides to do a deal can push one over the line.

Debenhams has spent most of 2020 renegotiating the lease terms on its stores, with chairman Mark Gifford leading the push towards a more sustainable footing for the retailer. In one sense, the Covid-19 pandemic has helped Debenhams’ case in these negotiations. In-store footfall has collapsed this year pushing many retailers into rent renegotiations with landlords.

Debenhams has also put together a restructuring plan that proposes its current 124 stores are cut back to 60. That plan is believed to have been presented at talks with potential buyers.

From JD Sports’ perspective, a large part of Debenhams’ attractiveness is believed to be the strength of its online presence. Its website is one of the UK’s most popular ecommerce properties. Another obvious draw might have been presumed to be the possibility of JD Sports putting its brands in Debenhams stores, or even the possibility of placing concessions in larger stores. However, it is believed the sportswear retailer is not interested in doing so. However, acquiring ‘cheap space on the high street’ is thought to be a major factor in the company’s interest.

One thing is certain, and that is any deal with JD Sports would anger Frasers Group owner Mike Ashley. The controversial businessman has been attempting to engineer a cut-price route to taking control of Debenhams for three years now. The Sports Direct founder saw his £150 million stake in the department store operator wiped out by the debt-for-equity swap that saw hedge funds take control of the business. He has since, unsuccessfully, called for a government investigation into the administration process.

Frasers Group, formerly known as Sports Direct, was excluded from further involvement in the sales process of Debenhams after declining to meet the £300 million valuation set by the latter’s advisers. Frasers Group is believed to have offered just £125 million, claiming that insufficient data on stores performance was provided. Debenhams countered that, as the owner of direct competitor House of Fraser, giving full commercial details would have been anti-competitive.

Like Mike Ashley, JD Sports has a history of buying up struggling rival businesses, including Footasylum and Pretty Green, established by former Oasis frontman Liam Gallagher. Debenhams, however, is a very different kind of retailer to those JD Sports has previously snapped up, and JD’s interest provoked surprise in many quarters.

Looked at positively, Debenhams could be a very shrewd acquisition at an attractive price. The less positive outcome is that taking on the department store chain as a turnaround project could distract JD Sports from its successful sports fashion strategy. Its already solid relationship with Nike and Adidas, the two leading sportswear brands, was recently further strengthened by the acquisition of U.S. sportswear retailer Finish Line for $558 million.

If the deal doesn’t go through, which is still perfectly possible, the alternative would be Debenhams’ liquidation. Hilco, the liquidation specialists, remains on standby.

JD Sports investors appear to hold a cautious view of the potential deal, with the company’s share price down 1.34% yesterday after the news was reported.

Asian shares on the defensive as Covid-19 cases...

MSCI’s broadest index of Asia-Pacific shares outside Japan was barely changed at 718.72, while... END_OF_DOCUMENT_TOKEN_TO_BE_REPLACED

ECB policymakers’ hint for further negative rates and the Fed’s dovish halt was the... END_OF_DOCUMENT_TOKEN_TO_BE_REPLACED