The JD Sports share price is up by over 25% over the past 12 months but the sportswear retailer continues to deliver for investors after today raising its full-year profit guidance to over twice its pre-pandemic level. The company’s strong performance over the Christmas period saw sales for the 22 weeks to January 1 improve 10%. As a result, it now expects pre-tax profits to reach at least £875 million. That is well ahead of previous forward guidance for £810 million.

The 1981-founded “King of Trainers” is one of the UK retail sector’s best examples of a traditional high street brand embracing e-commerce and benefitting both on and offline as a result. While many high street rivals have struggled over recent years, JD Sports has gone from strength to strength. Its focus on “athleisure” wear has been a strength during the Covid-19 pandemic but few might have expected the retailer to last year more than double its pre-pandemic profit figure of £438.8 million. 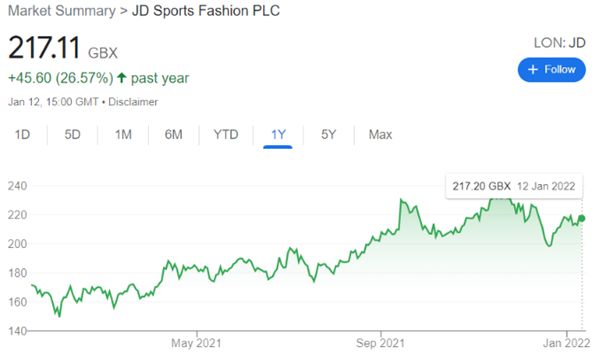 Expansion into the U.S. has helped and JD Sports believes that U.S. fiscal stimulus, especially the cheques sent out to qualifying citizens in both 2020 and 2021, boosted revenues by at least £100 million. Cash liquidity in the world’s largest economy encouraged consumers to spend at its U.S. brands last year as restrictions lifted.

JD Sports now owns a total of 3066 physical shops globally. In the UK its brands include Size?, Footpatrol, and Go Outdoors, as well as JD Sports itself. And in the USA the company now owns 4 brands – Finish Line, Shoe Palace, DTLR Villa and Livestock.

Current CEO and chairman Peter Cowgill has run JD Sports since 2004, delivering shareholders returns of almost 10,000% over that period. He commented yesterday that the profit guidance upgrade on the back of performance over the second half of the year represented “a sensational result”, before going on to add “I think it’s pretty spectacular — doubling the profit — which is sort of being overlooked.”

Like most retailers, JD Sports is still grappling with supply line issues including slowed manufacturing output in the Far East the shipping costs and delays that have resulted from pandemic disruption.

Nike, one of JD Sports’ most important strategic suppliers, has already announced it expects supplies of its products to be lower than would normally be expected until around Easter. However, Cowgill does expect those challenges to start to ease over the second half of 2022.

Inflation is likely to prove a double-edged sword. Cowgill said increases to “the living wage” will increase the company’s salary costs but “also is an equal opportunity because a lot of our customers are on the living wage”.