There aren’t many high street fashion brands that can say the Covid-19 pandemic improved their business but JD Sports is one. The sportswear and athleisure retailer announced a 52% rise in sales over the 26 weeks to the end of July, taking total revenues to £3.9 billion. Pre-tax profits over the period soared to £364.4 million from £41.5 million a year earlier when investment in warehouses and other logistics infrastructure as well as making physical stores Covid-secure depressed the figure.

Markets reacted to details of the impressive performance, and an upward revision of the company’s full-year revenues and profit guidance, by sending the JD Sports share price up 9.7% in trading yesterday, taking gains for the year-to-date to over 41%. 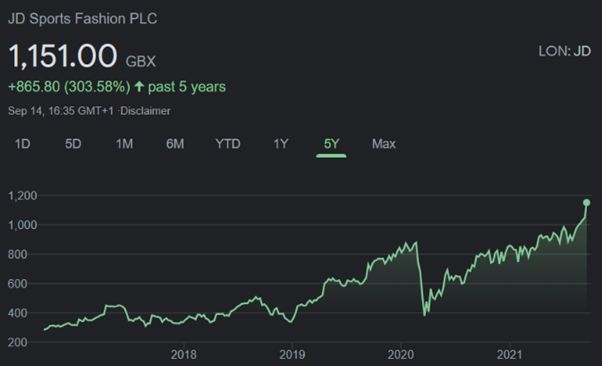 The impressive record performance over the first half of the year was driven by a combination of a surge in online sales and a boom in-store when shoppers returned to the high street and shopping centres after the most recent lockdown period ended.

New group revenues contributed by the company’s growing presence in the U.S. where it has made acquisitions were a further factor. JD Sports has expanded to 3,066 stores worldwide across the JD Sports, Size?, Footpatrol and Go Outdoors brands in Britain and Finish Line, Shoe Palace, DTLR Villa and Livestock in the U.S.

Profits generated in the UK rose above pre-pandemic levels to £170.8 million thanks to the company’s successful pivot to more online emphasis. The group’s executive chairman Peter Cowgill praised the result in the face of difficulties which he namechecked as

“widespread strain on international logistics and other supply chain challenges, lower footfall in stores in many countries after reopening and the administrative and cost consequences resulting from the loss of tariff-free, frictionless trade with the EU.”

“has my full support and I remain committed to the group”.

The opportunity to express frustration at the Competition and Markets Authority (CMA), which this month stated it believes the JD Sports’s £90 million acquisition of Footasylum, announced in 2019, should be blocked. Cowgill expressed the opinion the CMA failed to appreciate how much market conditions have changed over the past year.

Further acquisitions are, however, being considered. Cowgill responded to speculation over a potential bid for the online fast fashion retailer Missguided with confirmation deals that either expand the group’s presence geographically or offer new lines “relevant to a style-conscious consumer”, are being looked at.