The JP Morgan share price yesterday slid by 1.6% despite the USA’s largest bank unveiling a surprise third quarter profit to show a recovery from the Covid-19 lockdown-hit Q2 that has been more pronounced than expected. The performance of the big U.S. banks is considered a strong gauge of the underling economy in the USA so the largest of them all beating analyst forecasts across all major data points should have been cause for investor optimism.

The bank set aside less than forecast in reserves to cover expected loan defaults, suggesting levels of bad debts resulting from the economic impact of the virus may be less severe than feared. JP Morgan’s large consumer and small business lending units are viewed as a key indicator of the strength of the underlying U.S. economy. 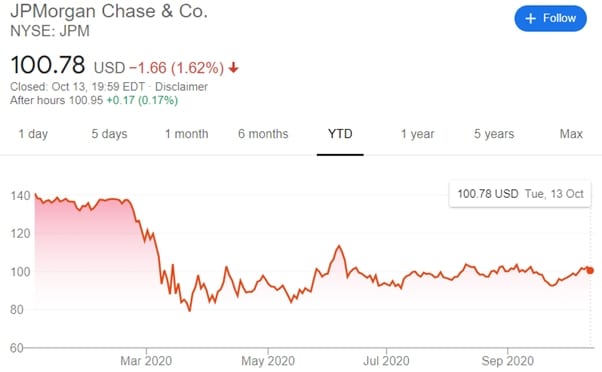 $10.5 billion in cash was set aside over the second quarter as a bad loans provision and analysts had expected $2.4 billion to be added to that over the third quarter. In the event, a more modest $611 million in additional reserves was added to the fund.

Third quarter revenue was up an impressive 29% year-on-year to $7.8 billion thanks to JP Morgan’s traders taking advantage of continued market volatility. Trading units in investment banks tend to outperform during period of elevated volatility. Corporate banking revenue was also a bright spot, up 6% to $3.7 billion. However, income from consumer banking predictably dropped as rock-bottom interest rates squeezed margins on lending. But a fall of 9% was still ahead of expectations. Total third quarter profit came in around a third higher than had been expected and at $9.4 billion was an improvement on last year’s $9.1 billion figure. Revenues were down less than anticipated with income totalling $29.1 billion just shy of last year’s total of $29.3 billion over the same period.

The fact that the bank’s share price slid despite comfortably beating analyst predictions may have been influenced by negative remarks by JP Morgan’s management over the level of uncertainty the US economy faces over coming months. JP Morgan chairman and chief executive Jamie Dimon cautioned that a “good, well-designed” fiscal stimulus package was needed from Washington to “increase the chances that we’ll have better outcomes . . . But there’s so much uncertainty.”

Citigroup, the USA’s fourth largest bank, also published its third quarter results yesterday as earnings season got underway. The picture there was less rosy with the bank’s third-quarter profit down 34% compared to the same three months a year earlier, at £3.2 billion. Revenue was down to $17.3 billion from $18.6 billion. Bank of America and Wells Fargo, respectively the 2nd and 3rd largest banks in the country, will report today.

Despite the slightly less positive results from Citigroup, compared to those of JP Morgan, analysts at equities research firm Oppenheimer described the overall picture from the two banks’ results yesterday “a very positive start to bank earnings season”.