Wall Street aristocrats JP Morgan are tipping the value of cryptocurrency Bitcoin to more than quadruple from current levels if it starts to genuinely compete with physical gold as a store of value. There are signs that is already starting to happen with more adventurous investors. But if the trend that JP Morgan says “has already started”, gathers enough steam to start to convince more mainstream investors, recent Bitcoin price gains could be the start of much more to come.

JP Morgan thinks a steady continuation of the trend towards Bitcoin being viewed as a genuine alternative to gold as a store of value could culminate in its price rising as high as $146,000. Bitcoin is today trading slightly above $34,000 again after a correction on profit taking saw it briefly dip back below $30,000 on Monday.

At its current levels of volatility, it is hard to see Bitcoin as a genuine like-for-like alternative to gold as a store of value. But those who do believe in its long-term potential, expect the original cryptocurrency’s price volatility to flatten as the market for it matures. 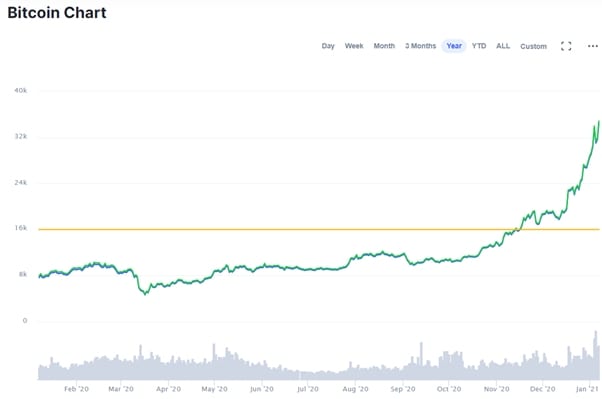 A quadrupling of Bitcoin’s value doesn’t sound particularly far fetched after it did just that over the course of 2020. It started the year priced at around $5000, fell to $3000 in March and had rocketed to over $28,800 by the time 2020 drew to a close last week. A number of institutional investors are known to have taken significant hedging positions in Bitcoin over the course of last year.

When Bitcoin was first released in 2008, it was positioned as a digital alternative to fiat currencies. However, scalability issues with Bitcoin’s underlying blockchain technology mean many analysts are sceptical as to its genuine viability as a currency used for everyday transactions. It’s main potential is now seen as more a store of value, or digital gold.

To match the value of private wealth stored in gold bars and coins, or held via gold funds, a team of JP Morgan analysts calculated that Bitcoin’s total market capitalisation would need to multiply by 4.6 times its recent $575 billion. That would infer a value of $146,000 per bitcoin.

“Considering how big the financial investment into gold is, a crowding out of gold as an alternative currency implies big upside for bitcoin over the long term. However, a convergence in volatilities between bitcoin and gold is unlikely to happen quickly and is in our mind a multiyear process”.

“While we cannot exclude the possibility that the current speculative mania will propagate further pushing the bitcoin price up toward . . . $50,000 to $100,000, we believe that such price levels would prove unsustainable.”