The Just Eat share price has surged by over 26% in Monday trading after weekend reports that the FTSE 100 food delivery company is in merger talks with Amsterdam-listed European peer Takeaway.com. If the deal goes ahead, the combined company would be expected to have value of over £9 billion, making it the biggest food delivery business in the world, ahead of Uber Eats and Deliveroo. The latter is Just Eat’s biggest competitor in the UK and recently attracted a major investment from Amazon. 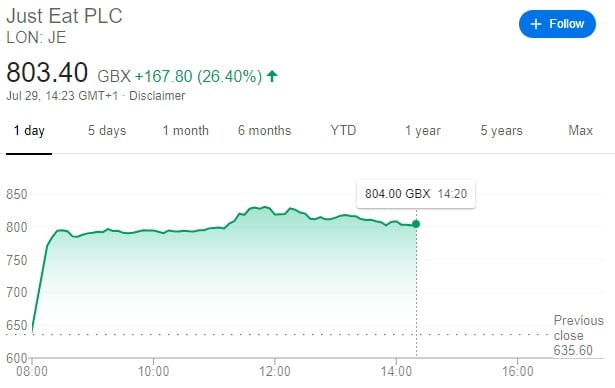 Amazon’s investment in Deliveroo, is presumed to have been made with a view to including the company’s service, or at least leveraging its know-how, in ‘last mile’ deliveries. The e-commerce giant led Deliveroo’s recent $575 million funding round. With an ambition to achieve 1-day deliveries for e-commerce orders made on Amazon, and eventually get some product ranges to buyers within hours of them placing an order, the company clearly sees value in Deliveroo’s processes outside of just food delivery.

Uber Eats, the ride hailing app’s food delivery service, has recently stepped up the competition in the UK market by aggressively cutting fees in Britain and Ireland. A Just Eat and Takeaway.com tie-up would be expected to result in a group with the scale to take that competition on head-to-head both in the UK and in Europe.

Just Eat has found itself under pressure in recent times. Former CEO Peter Plumb left the post in January after just 16 months in the job and has yet to be replaced. Cat Rock, the U.S. hedge fund that is an investor in Just Eat has been pushing for a merger, arguing it is the best way for the company to attract a high quality chief executive to fill the vacancy. If the Takeaway.com merger goes through, Jitse Groen, the Dutch company’s founder and CEO would be favourite to take on the mantle of leading the combined group.

After Sky News broke news of the merger talks over the weekend, Just Eat released a comment that talks over a ‘possible combination’ had taken place. Despite the fact the two companies are similarly sized, with Just Eat’s current market capitalisation after today’s share price rise actually higher than Takeaway.com’s at £5.42 billion to £4.72 billion, the merger would be expected to be structured as an offer from the latter.

Is The Rationale Behind Emerging Markets Investment Broken?

While most still caveat the argument with the get-out clause it is far from... END_OF_DOCUMENT_TOKEN_TO_BE_REPLACED

Natural gas prices have rocketed with Russia accused of managing supply to drive up... END_OF_DOCUMENT_TOKEN_TO_BE_REPLACED

After their valuations boomed in 2020, the UK’s online fast-fashion giants of Asos and... END_OF_DOCUMENT_TOKEN_TO_BE_REPLACED

The dust has almost settled on the months-long takeover battle between U.S.-based private equity... END_OF_DOCUMENT_TOKEN_TO_BE_REPLACED