The share price of Just Eat Takeaway fell by over 8% today in Amsterdam after the food delivery company’s chairman Adriaan Nühn abruptly resigned today. The group is now worth less than when it first listed on the Amsterdam stock exchange in September 2016. Then its shares traded at €24.50 compared to the €24.13 they have dropped to today.

In a day of drama, the company’s supervisory board also withdrew a planned vote on chief operating officer Jörg Gerbig’s re-election to the management board after a complaint about his conduct. That effectively means two high profile board departures ahead of the AGM starting in Amsterdam this afternoon. It was expected to prove a volatile meeting with shareholders furious at the plunge in the company’s value over the past two years. 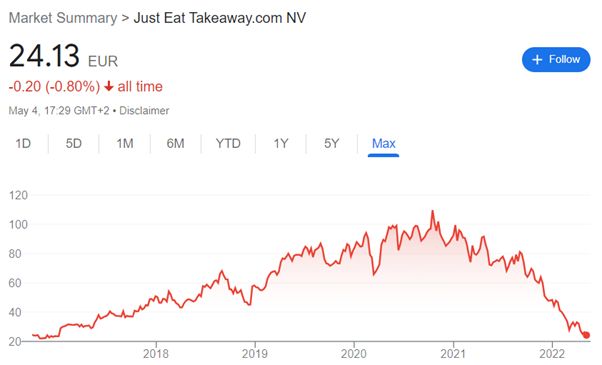 Hedge fund manager Cat Rock Capital Management, which owns 6.9% of Just Eat Takeaway has been scathing of the takeaway delivery group’s $7.3 billion takeover of U.S. peer Grubhub. Cat Rock complained at the time that the deal significantly overvalued the American company whose underperformance since has been a major factor in Just Eat Takeaway’s crumbling valuation.

Nühn’s decision to jump ship before today’s AGM is seen as pre-empting calls for a vote of no confidence in the current board. He commented that it was “clear that shareholders have concerns about the challenges the company is facing”.

He continued that he believed the supervisory board would need shareholder support to successfully “focus on the challenges and opportunities ahead”, adding:

“Not seeking re-election is, I believe, the best decision I can take with regard to serving the interests of the company and its stakeholders.”

Corinne Vigreux, vice-chairwoman of the supervisory board, a role she combines with her day job as chief marketing officer at shoe brand TomTom, will take over as interim chairwoman until a permanent successor for Nühn is appointed. Some investors have also been calling for the resignation of Brent Wissink as chief financial officer, which could yet result in another vacant board role to fill.

However, the allegations around Mr Gerbig appear to have come as a shock. The company commented on the development with:

“The supervisory board has recently been informed of a formal complaint regarding Jörg Gerbig relating to possible personal misconduct at a company event. The company has initiated an investigation into the allegations in line with the company’s ‘speak up policy’ and will engage an external expert to conduct the investigation.”

“Mr Gerbig is fully co-operating with the investigation and has informed the supervisory board that he has full confidence in the outcome.” If the allegations prove unfounded, he could be put up for re-election to the management board.”

The dramatic events of the past couple of days are likely to also put additional pressure on Just Eat Takeaway’s chief executive Jitse Groen, who founded the company in 2000 while still a student. The current company was created through a 2020 merger between Groen’s company Takeaway.com and London-listed Just Eat.