Home Latest News Just how bad would a new dotcom crash be for your pension? Some of Britain’s biggest are heavily exposed to tech
Latest News

Just how bad would a new dotcom crash be for your pension? Some of Britain’s biggest are heavily exposed to tech

Over the past decade, big technology companies have been a hugely successful investment for those owning their shares. Especially the biggest, the FAANG group of giant U.S. tech stocks comprised of Facebook, Apple, Amazon, Netflix and Google-holding Alphabet plus Microsoft, Nvidia, Tesla and a handful more, have seen spectacular gains. Especially over the past couple of years.

That success has seen the biggest tech stocks almost take on the role of safe-haven investments. When markets have hit squalls, such as in late 2018 and March last year, the biggest technology companies have been the quickest to recover. Institutional investors have put their faith in a quick recovery. In fact, in both cases, relatively serious corrections were immediately followed by new bull markets and valuations hitting new heights.

That extended period of success for big tech has seen managed pension funds invest billions of their clients’ retirement savings into big tech. In many ways, that’s created a virtuous circle. The more money is entrusted to backing the biggest high growth tech companies the faster their valuations have risen.

That has also convinced millions of small investors picking their own stocks to ride the trend. Pushing big tech’s valuations higher again and justifying the faith of institutional investors, including pension funds.

But while there are reasonable counter-arguments as to why we may not be in a new dotcom bubble, there are also strong arguments that tech valuations are now looking very stretched. Some analysts (quite a few) say completely detached from any kind of traditional metrics or long-term sustainability.

If the experts who think time is nearly up on big tech’s extended period of stellar growth are right, there are two possible outcomes. The first is a less dramatic correction, which could potentially unfold over a period of time as big tech matures from growth engine to cash machine. That would give fund managers time to dial down their exposure to tech in a managed way.

The second probably outcome to a slowing of the growth rate for tech’s biggest companies is a second dotcom crash. It’s far from impossible that at some point markets will get a nose bleed at big tech valuations, sparking a sudden rush to profit-take.

Something like that happened in late 2018 but the correction ran out of steam before it snowballed into an avalanche. The next time a significant tech sector correction takes hold, many fear it might escalate to a point of serious stock market destruction.

In the worst case scenario of ‘dotcom crash 2.0’, do you know how exposed your pension is to the biggest tech stocks and the sector more generally?

How exposed are pensions to big tech?

You certainly don’t want your pension to not have any exposure to big tech. First off, that would have meant losing out of a lot of returns in recent years. And secondly, there’s no guarantee there won’t still be serious returns to be made from big tech over the next few years. In fact, it’s a distinct possibility.

And your pension fund, or funds, almost certainly do have exposure. The typical major general-purpose UK pension fund has around 15% of assets invested in the biggest tech stocks.

But at the same time, the risk of a major correction, or even crash, unfolding at some point over the next couple of years is probably as high as it has ever been. And some major UK pension schemes have significantly higher exposure than others. Recently, that’s been very much to their benefit. The best performing pension funds have been those with the highest exposure to big tech stocks.

But at this stage, that also has to be considered a less than insignificant risk factor.

The Sunday Times last week published research on exactly how exposed to big tech some of the UK’s biggest pension funds are. It found the five of the biggest, Now:Pensions, The People’s Pension, Nest, Aviva and the Pensions Trust all have Apple as their top holding.

The greatest exposure to the Apple share price is held by Nest, the government workplace pension scheme. Its 2040 retirement fund has 3.8% of its value invested in the stock. One of problems for pension funds is that they didn’t necessarily invest huge sums in individual technology stocks. But their rocketing valuations have increased their weighting compared to other assets held.

While they’ve done very well out of tech stocks like Apple, boosting returns for their pension investors, the flip side of the coin is that the increased value of these assets can mean overall portfolio value is now riskily exposed to their future fortunes. Nest, for example, has said it is actively looking at ways to adjust its exposure to big tech by exploring opportunities in private credit and unlisted infrastructure equity. Private markets can also offer strong returns and would provide more diversity, spreading portfolio risk.

While different analysts and market observers have varying opinions on the matter, there are fears stocks like Tesla, a top ten holding of The Pension Trust’s default fund, are currently overvalued. Amazon, despite also continuing to grow quickly, is also valued at a price-to-earnings ratio of around 100. That’s huge by traditional company valuation metrics and has to be considered to represent a level of correction risk that would be considered high in the context of a pension fund, which is supposed to be relatively low risk.

“Some valuation measures are flashing red. The year 2000 witnessed the dotcom crash, which resonates today because technology stocks helped to drive the global stock market to a record high.”

Comparisons with the dotcom bubble that began to build in the 1990s have been made. In the leadup to the bursting of the bubble in 2000, investors, fuelled by a fear of missing out, were ready to buy popular tech stocks at almost any valuation. However, as soon as that euphoria ebbed, technology stock prices crashed back to earth. 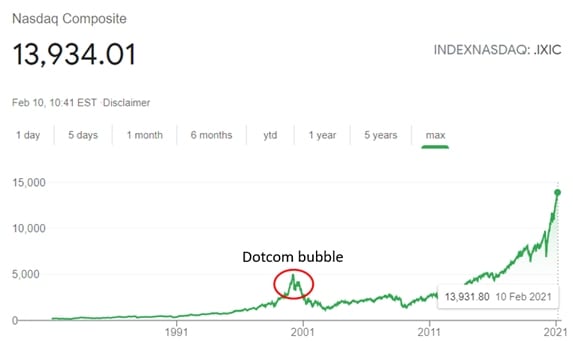 There is a not unreasonable argument that most of today’s biggest technology stocks have solid, proven business models and earn billions in revenues and profits. Many of the dotcom stocks were little more than ideas in prototype with little in the way of genuine revenues.

However, over the past couple of years a number of huge loss-making tech companies have gone public and seen their valuations soar. Doordash, which floated in December, is a recent example. Tesla has only been turning a profit for a year and that’s based on selling carbon credits to traditional car manufacturers. After a rocky first 18 months as a public company, during which analysts repeatedly questioned its pathway to profitability, Uber’s valuation has almost doubled since October last year. Despite the fact the Covid-19 pandemic has hurt its core ride hailing business badly, decimating revenues.

To some extent, pension funds are protected from severe market volatility by virtue of the fact money is drip-fed into them by savers on a monthly basis. That evens out long-term returns. With many pension savers also a long way from retirement, potentially decades, pots should also have time to recover from any hit from a tech sector correction. But pension savers should be aware of their exposure to tech, especially those with multiple pension pots from old jobs.

The Pensions Policy Institute think tank estimates that there are around 8 million forgotten pension pots in the UK and expect that number to increase to 27 million by 2035. The relative lack of diversity in standard pension funds means investors with old schemes could well have the same exposures to the tech sector several times over.

For example, the average 45-year-old employee with £100,000 in pension pots, spread across three ‘standard’ pension funds could well, probably unwittingly, have up to 15% of that exposed to the biggest technology companies. Around £5000, 5%, would be expected to be invested in the stock of just three companies – Apple, Microsoft and Amazon.

90 out of 100 pension fund investments are in the default fund chosen by their employers. Default funds for younger pension savers are typically higher risk funds targeting growth and those for older savers approaching retirement would be expected to have been put into a lower-risk default alternative. And while those paying into workplace pension schemes often don’t have a choice of provider, they should at least be able to see details of how the funds available invest and be able to choose between at least a few options with variations in investment strategies.

However, many pension funds, including the popular Aviva, Nest and The People’s Pension funds discussed earlier, only publish the top 10 holdings in their funds on their website. However, they should provide a full breakdown of investments on request, if scheme participants ask.

Assessing the extent to which your pension pots are exposed to big tech can be complicated if the funds do not hold individual stocks but instead invest in market indices or other funds. The latter is referred to as a ‘fund-of-funds’. New:Pensions’ default fund, for example, allocates 28% to tracking the S&P 500 index. Due to the heavy weighting of big tech companies such as Facebook, Alphabet, Amazon and Apple, that means around 15% of the fund’s capital is invested in big tech.

Depending on where you are in your pension investment timeline you may be more than happy to be invested in a pension scheme with a significant allocation to big tech. It’s unarguably been a winning strategy for the past several years. But as tech valuations continue to rise, so does the risk of a major correction at some point over the next few years.

That doesn’t mean it will come. Or that it will be a major correction or crash if and when it does. But if you are approaching retirement and lack the luxury of being able to wait out a recovery, significant exposure is something to be aware of, giving you the option of dialling it down.

The first step is to always know what your pension pots are invested in. Your pension provider should publish a factsheet twice a year that lists investments. Ask for the full list if only the top 10 holdings are included. If you have multiple pension pots, strongly consider consolidation as that will make tracking holdings and sector exposure far simpler.

Should investors worry about the energy giants’ aggressive...

Google to pay for news as News Corp...

It’s just over a year since global equities crashed after a sharp sell-off in... END_OF_DOCUMENT_TOKEN_TO_BE_REPLACED

A majority of Initial Public Offerings (IPOs) are not accessible to retail investors. The... END_OF_DOCUMENT_TOKEN_TO_BE_REPLACED