JustEat Takeaway.com Share Price On The Rise As Growing Company Cleans Up On Lockdown Orders

The JustEat Takeaway.com share price is up 2.5% over morning trading today after the newly expanded food ordering app company reported results that showed a market booming as a result of lockdown. The group, formed earlier this year through the acquisition of UK-based JustEat by Dutch peer Takeaway.com, also recently announced the $7.3 billion all-share takeover of U.S. company Grubhub.[optin-monster slug=”z0dpnwjsixpzcdk8vqmh”]

JustEat Takeaway.com is now the largest takeaway delivery company in the world outside of China. And the combined group is steaming ahead thanks to 32% year-on-year growth driven by a particularly stellar second quarter over the height of international Covid-19 pandemic lockdowns. 257 million orders were processed by the group over the first half of the year.

A 44% jump in revenues to €1 billion and 133% growth in underlying earnings to €177 million further support today’s 2.5% share price gain. Losses did however also leap from €27 million to €158 million, largely as a result of €142 million spent on advisory fees associated with the two major takeovers this year. 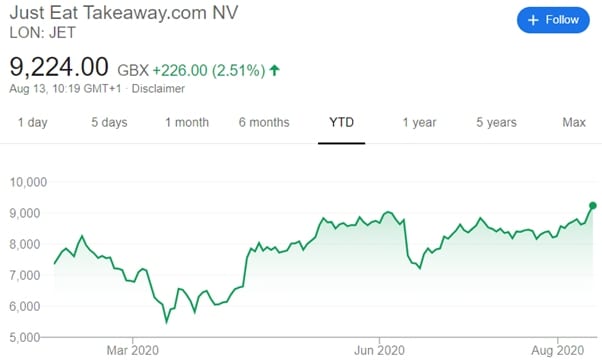 Just Eat, the Copenhagen-founded food delivery app that floated on the London Stock Exchange in 2014 was acquired for £10 billion before the more recent all-share $7.3 billion acquisition of Grubhub.

The takeaway deliveries sector has been one of the few to receive a boost from lockdown, which is working out well for companies in the space. They have struggled to achieve financial sustainability in the low margin, high competition and a period of consolidation had started before the onset of the coronavirus pandemic. It is hoped the economies of scale that will result from larger combined companies will eventually lead to belated profitability for the sector’s major players and the boost of the past few months will be a welcome head start.

The Just Eat brand’s UK operations saw 77 million orders processed over the first half of the year, representing 18% growth on the same period of 2019. The company has two businesses, one which only processes orders delivered by partner restaurants and another which also includes the delivery service itself. Both have shown strong growth, resulting in a 28% rise in earnings to €303 million and 46% growth in underlying earnings to €127 million.

Just Eat also launched a programme of temporary commission relief worth €13 million, designed to help support partner restaurants and takeaways during the pandemic. That and investment in the delivery business, which saw new partnerships established with McDonald’s and bakery Greggs led to a dip in the company’s UK gross margin.

JustEat Takeaway.com’s chief executive Jitse Groen, who founded Takeaway.com in 2000, reassured investors that the UK government’s Eat Out To Help Out scheme, offering 50% discounts on covered by the tax payer for meals out excluding the weekend, was not hurting the company’s business, commenting:

“Food delivery is rarely in competition with eat-in restaurants. Just Eat Takeaway.com is in the fortunate position to benefit from continuing tailwinds.”

One potential threat on the horizon for the group is Amazon’s acquisition of a minority stake in rival Deliveroo, which has recently been given the greenlight by the competition watchdog. Mr Groen argues the decision will be bad for consumers, commenting somewhat defensively “I don’t particularly care who competes against us. I think it’s the UK consumer who should be upset.”

The company hopes to recover some of the cash invested in its two big acquisitions this year by selling off its minority stake in iFood, the Brazilian takeaways delivery business. The stake was acquired along with Just Eat but Mr Groen warned potential buyers that it would not be sold on the cheap, despite actively seeking a buyer.

It’s very valuable. Whoever buys that stake will need to pay for it. It has a big value attached to it.”