The Kingfisher share price leapt by over 10% yesterday after the company reported surging profits at DIY-focused brand B&Q. The chain, which sell construction and home improvement tools and materials, has benefitted from people spending more time at home over lockdown, taking the opportunity to get stuck into DIY home improvements. Screwfix, Kingfisher’s other big UK brand, which sells construction tools more aimed at the professional market saw sales fall off. 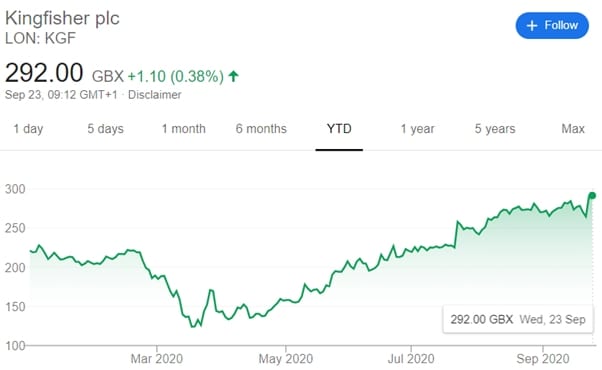 Booming online sales, up 164% across Kingfisher’s brands, with B&Q the engine of growth, meant profits showed 62.4% growth to £398 million before tax, despite overall revenues dipping by 1.3% to £5.92 billion. The figures cover the six-month period to the end of July and were described by the company as a “resilient performance”.

Sales in the UK, where Kingfisher employs around 26,500 staff and operates just shy of 1000 stores, were up 2.4% over the first half of the year. And the growth is accelerating. So far over the seven weeks since the end of July, they are up 18.9%. In recognition of the fact the Covid-19 pandemic hasn’t had a negative impact on the company’s revenues in the UK, it will also return £23 million in furlough payments made by the Treasury.

Chief executive Thierry Garnier commented that the pandemic has seen the return of DIY and gardening as hobbies, with younger customers often taking up the activities for the first time. Another factor in the favour of DIY has been, believes Mr Garnier, people being nervous about inviting tradespeople into their homes over the pandemic.

Kingfisher also owns the French DIY brands Castorama and Brico Dépôt, as well as businesses in Spain, Russia, Poland and Romania. Mr Garnier has been in charge of the company for around a year with his biggest change to Kingfisher’s strategy to abandon expensive attempts to unify operations between different brands. He feels this had diluted individual brands, while reducing their agility to react quickly to market forces.

After the Kingfisher share price slumped in spring along with the rest of the market during the coronavirus sell-off, it has since bounced back and this month reached 2-year highs, further boosted by yesterday’s over 10% jump.

Ecommerce growth has been by far the most pronounced source of revenues improvement. A year ago, online sales accounted for 7% of Kingfisher’s revenues. That has risen to 19% in 2020. The second half of the year has seen an “encouraging start”, with growth across all the company’s brands and categories leading to the 16.6% improvement in sales. Mr Garnier commented:

“The crisis has prompted more people to rediscover their homes and to find pleasure in making them better. It is creating new home improvement needs, as people seek new ways to use space or adjust to working from home”.

“It’s also clear that customers are becoming more comfortable with ordering online, and delivering value to consumers is imperative against a challenging economic backdrop.”

Kingfisher cancelled its interim dividend and investors will now be hoping to receive a full year payout based on the positive performance. However, the company’s management have remained cagey on the topic, stating it remains to early for them to commit.

Despite the positives, not all analysts are convinced if Kingfisher’s improved results will prove sustainable. Investec told investors in a note, which retained its “sell” rating on the stock that:

“We suspect demand will have been pulled forward from next year, when spending is likely to be impacted by rising unemployment.”