The Kingfisher share price has dropped by a little over 4% today despite the B&Q and Screwfix owner seeing profits rise by over a third to over £1 billion thanks to a recent DIY boom. The company beat analyst forecasts to record a 33.1% rise in pre-tax profits to over £1 billion for the year to the end of January 31 compared to £756 million over the previous year.

The bumper net profit means Kingfisher becomes only the third ever British retailer to earn over £1 billion in profit over a year, joining Tesco and Marks & Spencer to achieve the milestone figure. The new record net profit was achieved on just 6.8% sales growth with the group pulling in £13.18 billion over the year. 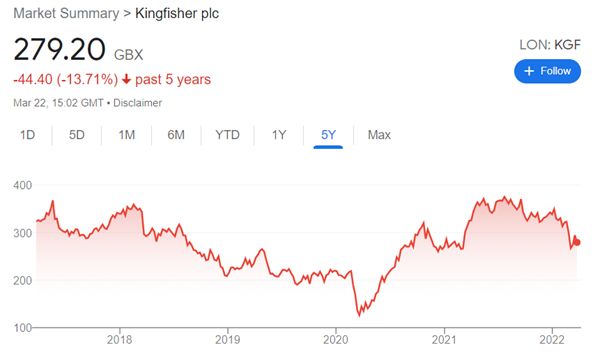 Kingfisher’s valuation has lost around 25% since highs last August as investors worried about whether the group’s pandemic-fuelled recent growth would drop off without lockdown periods to encourage British households to try their hands at DIY. However, the company today reported that demand was remaining “resilient” and it expects to meet analyst expectations for a profit of £736 million this year.

However, a note of caution around the potential for economic slowdown and the impact of that might have on sales was added. While Kingfisher has no presence in Russia since selling its division there in 2020 and has stopped sourcing products from the country, a general hit to UK consumer spending power could impact sales. As well as the B&Q and Screwfix chains in the UK, Kingfisher also owns France’s Castorama and Brico Dépôt and employs around 82,000 staff across 1400 stores.

Kingfisher 2020 appointment of Thierry Garnier as chief executive has worked out even better than expected. The Ecommerce enthusiast was brought in with a mandate to modernise the group’s online presence and create synergies with its physical retail locations.

While that was anyway necessary, Mr Garnier’s appointment coincided with lockdown periods during the pandemic which forced the group into increasing the velocity of its digital transformation. In retrospect, circumstances played to his online strengths and has given him a good platform to build on from here.

Consumers stuck at home not only had extra time to devote to DIY projects but also extra cash not being spent on things like commuting, holidays and in the hospitality industry. A good portion of that additional spend was made online, with digital sales now accounting for 18% of group revenues. Screwfix has also started to offer one-hour deliveries, which have proven popular with tradesmen on jobs.

First quarter sales last year were, however, down 8.1% on the previous year though were 16% higher than during the quarter before the onset of the Covid-19 pandemic. Mr Garnier commented that the group’s recent performance represented “a very healthy retention of the demand and revenue uplift from the prior two years”.

One cloud has been supply chain issues including lockdowns closing Chinese factories and bottlenecks in port capacity and shipping container shortages. Rising energy and fuel costs, as well as inflation hitting the raw materials the group’s products are made from, are a further ongoing challenge.

However, Garnier today told investors the company is confident it is in a strong position to deal with an inflationary environment and has successfully managed its gross margins through hedging and leveraging its purchasing power with suppliers. He concluded:

“DIY is very competitive in an environment when people want to do more things themselves to save money.”