The Kingfisher share price has gained almost 3% in morning trading today despite sales at the DIY group dipping over the first quarter of the year. Investors nerves were calmed by the company maintaining its full year guidance, saying demand looks resilient, despite total sales over the first three months of the year falling 5.4% on the same quarter a year earlier.

The retailer, which also owns brands including France’s Brico Dépôt and Castorama as well as brands operating in other European countries including Poland and Romania, reported a 5.4% decline in like-for-like sales over the quarter to April 30. Total sales dipped by 5.8% to £3.24 billion. 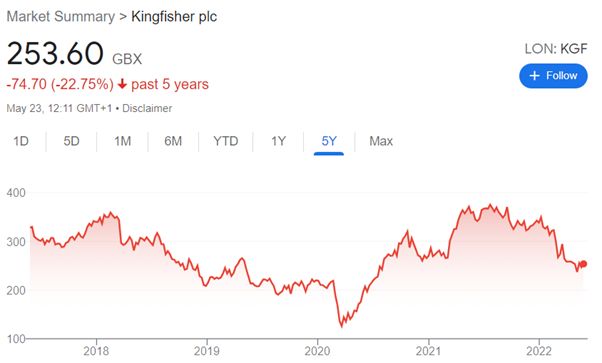 However, chief executive Thierry Garnier pointed out the group’s like-for-like sales were still up 16.2% compared to its last pre-pandemic financial year in 2019 and said the company was “facing very strong comparatives” with last year.

Despite the fall in sales over the three months to the end of April, Kingfisher believes it is on track to meet its existing guidance for pre-tax profits of about £770 million over the entire year. It will also, it was announced today, buy back an addition £330 million of shares, a move Garnier said “reflects our strong cash generation and confidence in the group’s outlook”.

A company statement read that despite the external headwinds confidence remains high:

“Mindful of the heightened macroeconomic and geopolitical uncertainty that has emerged since the start of the year. Our priority remains top-line growth, and strong and consistent execution. We are targeting further share gains in our markets and continue to focus on our strategic objectives and investments for growth.”

Kingfisher’s valuation has fallen by around 30% over the past twelve months after significant gains over the first part of the pandemic as DIY activity boomed with people spending more time at home during lockdown periods. However, despite recent declines, the company has performed significantly better than other lockdown winners such as online retailers and digital service providers. The Kingfisher share price is currently 253.6p compared to 219p just before the market sell-off provoked by the onset of the pandemic in late February 2020.

However, many analysts remain unconvinced Kingfisher will recover losses from the past year in the near term despite the bullish tone struck by the company today. Investec analysts Kate Calvert believes a likely hit to short term discretionary spending caused by inflation could see the DIY group’s earnings stumble this year.

A major positive for Kingfisher’s brands over the past couple of years has been the introduction of speedy deliveries for tradespeople from brands like Screwfix and click-and-collect services that use stores like depots. Mr Garnier, who joined the group in 2019, is a specialist in fast deliveries having gained experience leading French supermarket chain Carreefour’s Asian division.

Today the company said its Screwfix Sprint service, that delivers goods to tradespeople on the job within 60 minutes now covers around 40% of the UK population. Screwfix plans to open 80 new shops in the UK and Ireland this year and the brand’s first in France at some point during the second half.

UK and Ireland sales are proving the group’s strongest market and sales were up 15.8% on last year over the quarter. However, that growth has been delivered by Screwfix with B&Q sales down 18.3%. Summer-weather products like garden items and fencing fell by 28%, indicating Brits anticipate spending less time in their gardens this year with many returning to office-based work for at least part of the week.

Like-for-like sales for the French business were down 3.7% with management restructurings at Castorama and Brico Dépôt helping reduce costs, allowing for a restructuring of pricing and improved logistics performance.