A crowdfunding campaign for a razor blade which its US creators claimed could remove facial hair with a laser beam has been suspended by Kickstarter.

The device had attracted more than $4m (£2.6m) in funding – but reportedly did not have a working model.
Backers received an email from Kickstarter saying the Laser Razor was “in violation of our rule requiring working prototypes of physical products that are offered as rewards”. 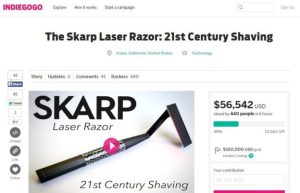 It has now been relisted on Indiegogo.

The gadget, by a firm called Skarp Technologies, based in California, raised nearly $40,000 in pledges in its first four hours on the rival crowdfunding platform.

On its Facebook page Skarp told its supporters “not to worry” and promised that the Laser Razor would be available in the spring.

Image copyrightIndiegogoImage captionThe razor is now being promoted on Kickstarter’s rival Indiegogo
“They have been incredibly helpful and they believe in the Skarp Razor as much as we do,” the firm said of Indiegogo.

Some people who commented on the original fundraising page had expressed worries about the firm itself, and a thread on community website Reddit questioned the technology, describing it as “far-fetched”.
Oliver Pearce-Owen, chief information officer of Skarp told the BBC Kickstarter’s decision had “left tens of thousands of people disappointed”.
________________________________________

Analysis: Rory Cellan-Jones, BBC Technology Correspondent
The whole idea of crowdfunding is that you are backing a project, not buying a product. Your support, your enthusiasm, your ideas can help change the whole direction of that project and ensure its eventual success.
But, as we have seen with this story and a number of others, backers are also taking a leap in the dark. Delays in delivering what was promised are common, and when it does arrive it may not look much like what was touted in the promotional video.

A case in point is the Zano drone, Europe’s most successful Kickstarter project. When I visited the west Wales company behind it in August, it was evident that problems were mounting up. And now on various forums, backers are getting angry and impatient.

One says the promotional video was what sold him on the drone but “the final product can’t even get off the ground, literally. If I knew then what I know now I would have saved that money.”

This is not just a problem for crowdfunded companies – platforms like Kickstarter and Indiegogo may have to be more diligent in checking that amazing new products do actually have some real technology to go with the marketing buzzwords.

The Budget: How Property Investors Could Be Affected

What Does Amazon’s ‘Nuclear’ Move To Offer Free...

Since he founded it as an online bookseller from the garage of his rented... END_OF_DOCUMENT_TOKEN_TO_BE_REPLACED

Last month the board of Wm Morrison, the UK’s fourth largest supermarket chain by... END_OF_DOCUMENT_TOKEN_TO_BE_REPLACED

The duration of the Covid-19 pandemic has seen some significant changes in consumer behaviour.... END_OF_DOCUMENT_TOKEN_TO_BE_REPLACED

With bond yields at historical lows, they are not a particularly attractive investment for... END_OF_DOCUMENT_TOKEN_TO_BE_REPLACED