One of the world’s most respected economists has told Bloomberg Television he is convinced the Bitcoin price has been “surging because there is a massive amount of manipulation. I think it’s a bubble”.

The cryptocurrency’s price rose above $50,000 for the first time this week and is up over 75% for the year with us barely past the half-way point of February. In mid-March a year ago, Bitcoin’s dollar exchange rate was around $5200. 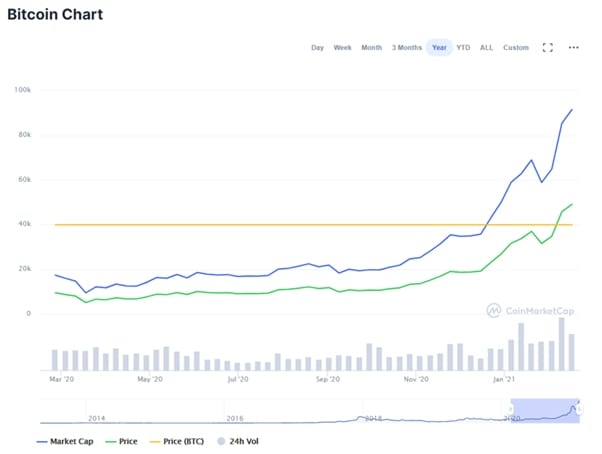 The most common narrative in recent weeks and months has been that Bitcoin’s price gains can be put down to growing interest from institutional and larger investors. That was recently reinforced after electric car-marker Tesla, the move instigated by boss Elon Musk, invested $1.5 billion in Bitcoin.

BNY Mellon, America’s oldest bank, also announced it is to launch a digital assets division to help customers buy and hold cryptocurrencies and other digital assets. The bank said the move had been motivated by increasing demand from clients.

Nouriel Roubini, a professor at New York University’s Stern School of Business, is less sure. He puts the burgeoning value of Bitcoin down to manipulation. He told Bloomberg Television he thinks the cryptocurrency’s bull run is a bubble. Not only that, he believes it’s one being carefully engineered by “a bunch of insiders and whales…controlling the entire system and manipulating it”.

He went on to offer evidence in the form of “pump and dump schemes” being coordinated “all over Telegram”, a social media platform popular for the anonymity it affords users.

Beyond the belief that the cryptocurrency’s price is being manipulated by a coterie of insiders and ‘whales’, owners of quantities of Bitcoin large enough to move the market when they buy or sell, Professor Roubini has more fundamental doubts over the digital asset.

“Fundamentally, Bitcoin is not a currency. The technology doesn’t allow more than five transactions per second. The Visa network allows you 24,000. It’s never going to be used for goods and services. It’s not a stable store of value. It’s just used for speculation and buying other cryptocurrencies. So it’s a self-serving system.”

He also didn’t hold back when it came to his opinion on the process of “mining” Bitcoin. Bitcoin miners use specialist computers, often in vast numbers, to solve the complex math problems the cryptocurrency’s cryptography is based on. Solving those problems is what verifies Bitcoin transactions and prevents fraud or forgery. Miners are rewarded for keeping the blockchain system running smoothly and securely in the form of newly created cryptocurrency.

But while providing close to impregnable security of the Bitcoin blockchain, mining is a power intensive and time-inefficient process. It’s also one that Professor Roubini says has been cornered by “oligopolistic firms” based in Russia, Belarus and China and controlling 70% of all mining.

It’s suspected many of these firms are not even paying for the huge quantities of electricity they are using thanks to operating from, says Roubini, “states in which there is no rule of law. It’s just pathetic.”