The litecoin price briefly spiked by around 30% yesterday after Walmart, the world’s largest retailer by sales, was caught up in a hoax centred on a fake PR announcement. A press release purportedly from the giant U.S. retailer which until recently also owned the Asda supermarket chain in the UK announced it would start to allow customers to pay for online purchases with the cryptocurrency Litecoin.

The press release, which was picked up by major news networks including Reuters and CNBC, turned out to be a fake and nothing to do with Walmart. However, anyone in the know holding litecoin would have been able to make a quick, sizeable profit over the short period the cryptocurrency’s value spiked before just as quickly falling back again. 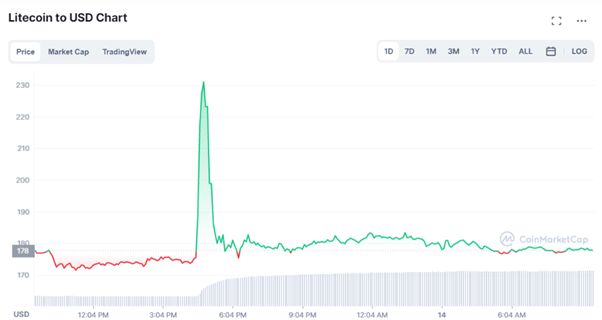 Litecoin’s advocates have long argued that it offers all of the advantages of bitcoin but is technologically superior. Launched in 2011, it was built on a copy of bitcoin’s source code but designed for faster transactional times, which average 2.5 minutes to bitcoin’s 10.

Litecoin’s mining algorithm, Scrypt, is also newer than the SHA-256 algorithm used by Bitcoin and doesn’t require as much computing power. The amount of energy used by the bitcoin network has been one of the main criticisms of the original cryptocurrency. Mining algorithms are sets of rules that govern the computational work performed to mine a cryptocurrency and verify its transactions.

The presumption is the hoax Walmart press release was designed to manipulate the litecoin price for long enough for whoever was behind it, and anyone else the information was shared with, to make a quick profit. The cryptocurrencies market is well known for so-called ‘pump and dump’ schemes where misleading information is released to influence the price of digital coins. Their vulnerability to manipulation is one of the main criticisms of volatile cryptocurrencies.

The hoax ‘Walmart’ press release was initially presumed authentic because it was distributed by GlobeNewswire, which is regularly used by major companies to send out corporate statements and announcements. Whoever submitted the PR, which included imaginary quotes from Walmart chief executive Doug McMillon and Litecoin Foundation boss Charlie Lee, to GlobeNewswire managed to convince the company it came from a legitimate source.

Walmart has said it is investigating how the PR was published, perhaps indicating official channels of communication may have been compromised. The high profile hoax is likely to act as further ammunition for those calling for digital assets and cryptocurrencies to be regulated.