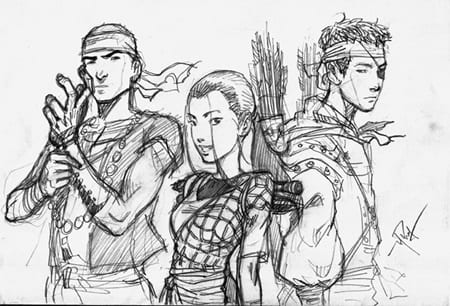 Crowdfunding, or garnering public financial support, has become an increasingly prevalent trend in the local cartoon industry in Viet Nam.

This phenomenon began to grab the attention of those in the comic community, when a group of authors start a project to raise funds for making a fictionalised Vietnamese historical comic Long Than Tuong (Marshal Long), last year.

In response to online requests last April to raise VND300 million (US$13,400) for the book’s first instalment, Vietnamese at home and abroad raised almost half of the needed sum in just two weeks, Nguyen Khanh Duong, the scriptwriter and producer of the book said.

“The goal was reached within just two months. The success was beyond our expectations,” he said.

The comic depicts the adventures of a teenager named Long fighting against the Chinese invaders during Viet Nam’s Tran dynasty (1225-1400).

The book has become the first locally created comic that has been doted on and received enthusiastic financial support from the public.

Crowdfunding in cultural and art projects, which includes independent fundraising and the gathering of supporters, has long been a practice in many countries, but the form remains in its infancy in Viet Nam.

Fully aware of the untapped local comic market, Duong and his young partners co-founded Comicola, a company operating in comics and crowdfunding, based in HCM City’s District 1.

The company has its own website and a distribution system which is teeming with activity to engage young artists, writers and readers.

Duong, 29, told Viet Nam News that crowdfunding was new in Viet Nam but has become an increasing trend in the local comic industry.

“Crowdfunding has great significance for both artists and the public, and it has given independent artists like us the opportunity to get closer to the public,” Duong said, adding, “Apart from having enough funds to establish their artworks, crowdfunding has also helped the artists to create a strong “communications” effect to popularise their works.”

The resounding crowdfun-ding success of Long Than Tuong has confirmed their conviction on the effectiveness of the model, that it is a great way to bridge the gap between artists and the public. It also allows them to join the project right from its infancy, which they often find appealing, he said.

“However, not all artists can do crowdfunding. It depends on the number of their readers or fans and the quality of their artworks,” he said.

Therefore, apart from the financial benefits that crowdfun-ding has brought to artists, the model also helps enhance artists’ responsibility toward their works, Duong said.

Established in the beginning of this year, Duong’s company has conducted 20 projects with a success rate of 70 per cent.

Following the model, Nguyen Canh Binh, chairman of Alpha Books Joint Stock Company, has tried to raise funds for the production of a book named Xu Dong Duong Thuoc Phap” (L’Indo-Chine Française: Souvenirs) via his Facebook page, and after a week he managed to raise more than VND20 million ($900) from book lovers.

“Seeing its success and recognising the great potential of the funding model, I would use it to raise funds for those books that are of great value, but have selective readership,” he said on vietnamnet.vn.

Binh launched a website at crobo.vn last month to use crowdfunding for establishment of some books. And the Xu Dong Duong Thuoc Phap book project has so far drawn contributions from more than 300 book lovers with a total funding of nearly VND90 million ($4,000).

Crowdfunding for books is now a global phenomenon and will surely be a success in Viet Nam, he said.

There are so many good books, but they are unmarketable so publishers would refuse to promote them for fear of losses. Therefore, crowdfunding is considered a good way to help bring good books to readers and to meet the genuine demand of a certain segment of book lovers, Binh said.

As the digital revolution gathers pace, the pressures on writers and publishers also increases.

However, now authors, magazines and independent presses are starting to respond to the challenge of the online world by turning to the internet themselves, and reaching out to readers through crowdfunding websites like those set up by Duong and Binh.

And crowdfunding is clearly a no-brainer for self-published writers of all stripes, Duong said.

That the international travel sector is, thanks to the Covid-19 pandemic, in a bit... END_OF_DOCUMENT_TOKEN_TO_BE_REPLACED

With a growing number of economists arguing there is a high chance we are... END_OF_DOCUMENT_TOKEN_TO_BE_REPLACED

While most still caveat the argument with the get-out clause it is far from... END_OF_DOCUMENT_TOKEN_TO_BE_REPLACED

Natural gas prices have rocketed with Russia accused of managing supply to drive up... END_OF_DOCUMENT_TOKEN_TO_BE_REPLACED

After their valuations boomed in 2020, the UK’s online fast-fashion giants of Asos and... END_OF_DOCUMENT_TOKEN_TO_BE_REPLACED