Lloyds Banking Group yesterday found itself embroiled in yet another scandal when it was forced to reopen a compensation scheme set up for victims of fraud. An independent review of the scheme arrived at the conclusion that small business owners who suffered as a result of the HBOS scandal had not been provided with “fair and reasonable offers of compensation”.

Sir Ross Cranston, the retired High Court judge leading the review ruled that an “unacceptable denial of responsibility” in the way Lloyds had handled the scheme meant “claims to direct and consequential loss must be reassessed”.

The Lloyds share price slid 1.05% during trading yesterday but investors in the bank will be concerned that losses could deepen. 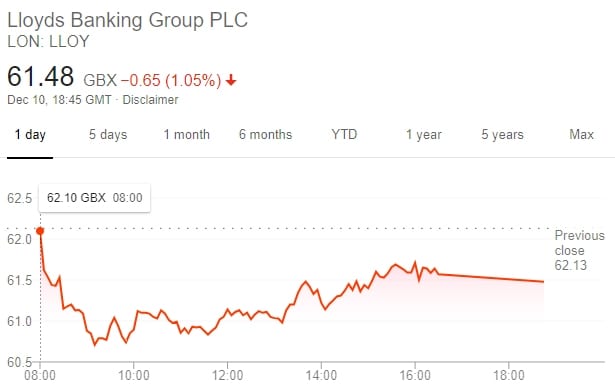 The Financial Conduct Authority (FCA), the UK’s financial services regulator, who initiated the review, have stated that Lloyds’s failings should be quickly addresses and that senior management now have a responsibility to explain how and why the review’s findings had occurred.

The HBOS scandal saw consultants linked to the group’s Reading turnaround unit take advantage of holes in the business lending process to steal from the bank and damage small business owners. The consultants were found guilty of pushing business customers into distress, many of them then failure, by referring them to a turnaround consultancy that then loaded them with debt and fees. Six people were convicted – 2 of them former employees of an HBOS branch, which has been owned by Lloyds Banking Group since 2009.

It was one of the biggest scandals in the UK’s banking history and having closed its £100 million plus compensation scheme this summer, Lloyds hoped to have drawn a line under it. Around £80 million was eventually paid out in compensation amid accusations of inconsistent payouts and flawed methodology.

The review led by Sir Ross was initiated by the FCA in May. Not all the findings were negative with Sir Ross noting that generous initial relief payments were made to alleviate stress and inconvenience to small business owners and that “early communications to customers were sympathetic and clear”.

However, he also found that there were serious flaws in the process – particularly around how the bank calculated the direct and consequential losses businesses affected had suffered as well as inconsistencies within that methodology. That, concluded the review, had led to numerous offers of compensation described as “neither fair nor reasonable”.

Lloyds was found to have adopted an “overly adversarial approach in its assessment of claims” and didn’t consider all evidence supplied by customers.

Sir Ross also criticised Lloyds for communicating the message the financial problems of customers were not the result of the actions of the convicted criminals. He believes the default message behind that attitude was that failure and financial suffering was all a result of decisions taken by customers. Sir Ross described that as:

“An unacceptable denial of responsibility. It undermined the sincerity of the bank’s apologies for the fraud, and portrayed the bank as the only victim to suffer financial loss.”

He has also recommended that a new, independent, panel should be set up to re-examine the victims’ claims and give them a voice.

In response to the review’s findings, Lloyds chief executive António Horta-Osório released the following statement, confirming that the bank will respect and cooperate with its conclusions:

“The group is committed to act on the recommendations made by Sir Ross and will fully support giving customers the option of a voluntary re-review of direct and consequential losses.”

Kevin Hollinrake, former chairman of the all-party parliamentary group on fair business banking, has also insisted that another result of the review should be a move to end banks being allowed to run internal redress schemes to compensate victims of their own wrongdoing.

Natural gas prices have rocketed with Russia accused of managing supply to drive up... END_OF_DOCUMENT_TOKEN_TO_BE_REPLACED

After their valuations boomed in 2020, the UK’s online fast-fashion giants of Asos and... END_OF_DOCUMENT_TOKEN_TO_BE_REPLACED

The dust has almost settled on the months-long takeover battle between U.S.-based private equity... END_OF_DOCUMENT_TOKEN_TO_BE_REPLACED