The Lloyds share price has gained over 1.5% today to take gains for the year since January 1st to almost 43% after the banking group saw its quarterly profits double. Strong mortgage lending since the beginning of the year, £15.3 billion and £2.7 billion in the last quarter, took profits for the three months to the end of September to £2 billion.

Lloyds now commands a market share of almost 20% of the UK’s overall mortgage market. The bank’s revenues for the year are up 8% to £11.6 million over the first three quarters. The growth level was 20% for the third quarter, bringing revenues for the three months up to £4.1 billion. 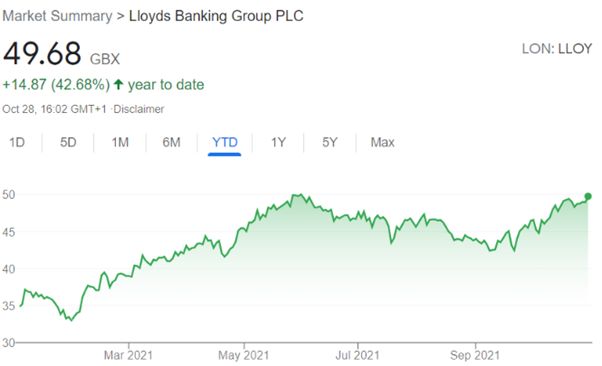 Stock market analysts had forecast pre-tax profits of £1.3 billion, putting the eventual £2 billion figure well ahead of expectations. It was a positive first quarterly report for new Lloyds chief executive Charlie Nunn who assumed the role in mid-August. He joined Lloyds from HSBC where he held the position of global head of wealth management and he also has senior positions at the consultancies McKinsey and Accenture on his CV.

Nunn takes over from former chief executive Antonio Hora-Osorio who was in the job for over ten years and was widely credited with turning Lloyds around after the financial crisis. Nunn yesterday told investors he will present his strategic review in February alongside the bank’s full year results. He did, however, say that he sees opportunities for growth through

Lloyds also offered a positive interpretation of the UK economy and forecast it will see growth of over 6% this year and that consumers will generally be able to absorb the expected uptick in inflation. The bank’s chief financial officer William Chambers referred to current business conditions as “very benign”, with bad debt charges below pre-pandemic levels.

That has seen Lloyds release a £740 million cash buffer that had been set aside to deal with pandemic-related losses. £84 million was released in the third quarter, helping to boost profits. The bank lent a total of £9.5 billion in the bounce back loans the government underwrote during the pandemic and another £2.5 billion in coronavirus business interruption loans. Exact figures on repayment levels have not been offered but the bank said only a small percentage are in arrears.

£525 million has been spent on remediation charges so far this year, with £100 million of that coming in the third quarter. Charges are related to compensation for poor communication on home insurance renewals and redress and costs related to the HBOS Reading fraud.