The swell of optimism around the UK economy’s ability to bounce back quickly from the Covid-19 pandemic blow was futher boosted, as was with the Lloyds share price, by the bank announcing a surprise leap in profits to £1.9 billion over the first quarter. Improving growth and employment figures forecasts in recent days have boosted the FTSE 100 and London Stock exchange generally.

Strong results for the UK’s biggest high street bank, and as a result a bellwether for the ‘real economy’, is likely to reinforce positive investor sentiment. Growing confidence in the economic bounce-back, helped along by the successful roll-out of the vaccination programme in the UK and government schemes supporting businesses affected by the pandemic, saw Lloyds book a £323 million credit on previous impairments, helping to boost the quarter’s profit figure. 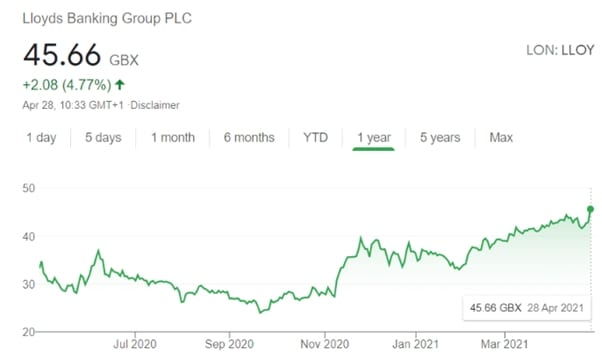 It’s the second set of positive results from a major London-listed bank this week after HSBC also yesterday announced it is to release $400 million of reserves that had been set aside to cover bad debts. The bank no longer believes such a large buffer is necessary and will now put the cash to work.

However, both Lloyds and HSBC are still striking a note of caution, highlighting that we are not yet completely out of the woods with regards to the coronavirus pandemic, which could still take further twists. The shadow of what happens when government support measures such as the furlough schemes are wound down over the coming months also looms large.

But Lloyds did up its forecast on UK GDP growth for 2021, increasing it to 5% from an earlier estimate of 3%. The bank is also now more optimistic about unemployment figures and has reset its forecast to a peak rate of 7% rather than the 8% previously predicted.

Lloyds chief executive António Horta-Osório said that while the scenario facing the bank and wider UK economy remained a difficult one, it was proving to be better than expected. Banks are also in a strong position of liquidity as a result of the obligation placed on them last year to build up their reserves. Excess funds, such as those released by HSBC, can now be redirected to increasing lending.

The first-quarter profit figure of £1.9 billion was well ahead of analysts expectations for £1.1 billion and a huge improvement on the measly £74 million profit for the quarter a year earlier. Net income was however down 7% on the same period of 2020 but did show a 2% improvement on the previous quarter, indicating general economic progress.

The bank lent a total of £4 billion to first-time buyers of property over the quarter, with mortgage lending boosted by the government-backed scheme to offer LTVs of up to 95%, which it is participating in. The government is taking on much of the banks’ usual risk.

Lloyds has also lent businesses £12 billion during the pandemic as part of government-backed support schemes. The recovery process on those loans will begin from this summer with the government picking up the tab for most defaults.

On the flip side, the bank has provided payment holidays on loans such as mortgages, personal loans, credit cards and car loans worth £1.3 million.

The quarterly results delivered yesterday will be the last for Mr Horta-Osório, who steps down as chief executive of Lloyds on Friday after ten years in the role. His tenure will be remembered as a successful one with the bank recovering after the financial crisis of 2008-09 and weathering the PPI mis-selling scandal and compensation payments under his leadership.

His next role, which he will take up as soon as Monday, is as the new chairman of Credit Suisse, Switzerland’s second-largest bank.

The private equity sector and cash-rich firms that comprise it split opinion. Some view... END_OF_DOCUMENT_TOKEN_TO_BE_REPLACED

At the end of August, The Times newspaper reported on two real estate funds,... END_OF_DOCUMENT_TOKEN_TO_BE_REPLACED

The Covid-19 pandemic has famously seen many sectors of the economy fall into two... END_OF_DOCUMENT_TOKEN_TO_BE_REPLACED

Britain, like most of the world, has traditionally been a country of milk and... END_OF_DOCUMENT_TOKEN_TO_BE_REPLACED