An announcement yesterday by Lloyds Banking Group confirming the appointment of Charlie Nunn, poached from rival HSBC, as its new chief executive failed to prevent a 3.5% slide in the company’s share price.

With markets sliding as a whole, the FTSE 100 down 1.1% and banking sector peers HSBC, NatWest Group and Barclays also sliding by comparable amounts, the Lloyds announcement didn’t cause the decline. However, it also doesn’t appear to have given investors additional cause for optimism. 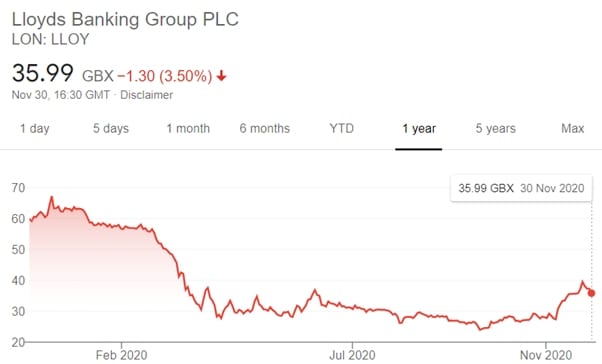 Mr Nunn, 49, will take over from current CEO António Horta-Osório, who has been in the post since 2011, next summer. Mr Nunn has spent the past 11 years at HSBC, with his most recent role 3 years as head of the bank’s wealth and personal banking division.

He walks into the lead role at a tricky juncture for Lloyds and the retail banking sector more generally. The Covid-19 pandemic will leave the economy weakened, bad debts are expected to grow over the next couple of years, and interest rates remain at rock bottom.

Robin Budenberg, Lloyds’ incoming chairman, was behind the decision to appoint Mr Nunn. The new pairing represents a full change of leadership at the top of the UK’s largest retail bank with Mr Budenberg himself not assuming his position until he takes over from incumbent Lord Blackwell in the new year.

Mr Nunn’s predecessor, Mr Horta-Osório, is one of the FTSE 100’s longest serving CEOs and is well respected having led Lloyds through a series of challenges in the wake of the financial crisis. However, the Lloyds share price has also almost halved over that period, leaving some investors to believe the time is now right for change.

It’s possible that there will be a short interim period before Mr Horta-Osório leaves Lloyds in June and the end of Mr Nunn’s six months period of ‘gardening leave’ after departing HSBC. Chief financial officer William Chalmers will hold the fort over that period, if necessary.

Mr Nunn started his career at a consultant at first Accenture and then McKinsey and has since held a number of positions within HSBC’s retail and wealth businesses and is well known in financial services circles. He is a family man with four children and is known to be a keen cyclist, while generally maintaining a low public profile. However, he should expect to be thrust into the limelight in his new position.

Mr Nunn commented on the announcement of his appointment:

“Lloyds’ history, exceptional people and leading position in the UK means it is uniquely placed to define the future of exceptional customer service in UK financial services.”

He will be paid a basic salary of £1.1 million and receive a fixed share award of £1.05 million. His pension provision has been set at 15% of his salary. Both Mr Nunn’s salary and maximum long-term share plan structure represent a 20% saving on what was paid to his predecessor, with new chairman Mr Budenberg also accepting a 20% paycut compared to Lord Blackwell.

Mr Budenberg said his appointment will “bring world-class operational, technology and strategic expertise to build on the strengths of the existing management team”.