The Lloyds share price has surged 4.5% over morning trading today after the banking group announced it had generated a forecasts-beating £1 billion profit over the quarter to the end of September. The pre-tax figure represents a huge improvement on the same period in 2019, when £1.8 billion being set aside to cover the cost of PPI liabilities meant a profit of just £50 million.

Analysts had expected Lloyds to announce a quarterly profit of £588 million – over 40% off the actual performance. The better-than-expected result has been attributed to a combination of a leap in demand for mortgages and the Covid-19 pandemic having a less significant impact than anticipated.

A provision of just £301 million was set aside for bad loans over the quarter, compared to an expected figure of £721 million. The positive turn of events has clearly enthused investors, who pushed the Lloyds share price up by almost 4.5% over the morning session. It’s a welcome boost, with the value of Lloyds Banking Group down around 55% for the year at yesterday’s close. 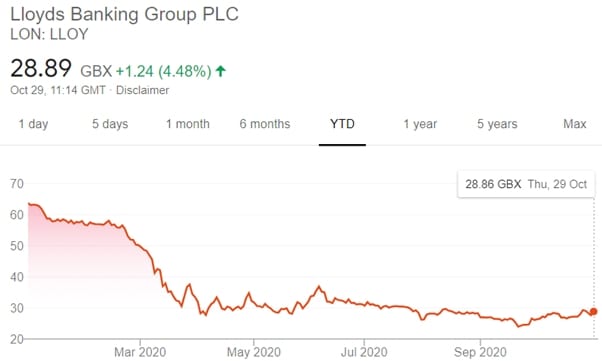 Lloyds is the UK’s biggest mortgage lender and a surge in the housing market over the summer went some way towards compensating for a pause in activity over the spring lockdown period thanks to pent up demand. The bank received its highest number of mortgage applications since 2008 over the quarter, leading to a £3.5 billion rise in lending compared to the same quarter a year earlier.

The strength of mortgage lending over the period will be considered a positive indicator for how the underlying UK economy is holding up, with the UK-focused bank considered a bellwether. It owns the Halifax and Bank of Scotland retail banking brands as well as Lloyds, with the insurance and pensions giant Scottish Widows and MBNA credit card business also part of the group.

Current chief executive António Horta-Osório has been in charge since 2011 and is widely credited with leading the group back to a position of strength after it was bailed out by the taxpayer during the 2008-09 financial crisis. However, he announced in July that he will stand down from his position next year.

With the full extent of the Covid-19 pandemic on the UK’s banking sector not expected to be felt until next year, there is a risk Mr Horta-Osório will not leave on the high he probably deserves to. Lloyds has been a key lender in the drive for banks to extend government-guaranteed loans to struggling businesses. From the bank’s point of view, there is little risk involved in these loans, which are covered by either full or part government guarantees.

However, the guarantees do not cover loans made to businesses pre-pandemic and many of those could have the potential to go bad over coming months. Over the first half of the year, Lloyds set aside £3.8 billion to cover losses on bad debts. Booking that figure tipped it into a £602 loss.

Mr Horta-Osório commented in a statement to investors along with the quarterly report:

“Although our performance has clearly been impacted by the pandemic and the associated challenging economic environment, I am pleased that we are now seeing an encouraging business recovery and, with impairments significantly lower, a return to profitability in the third quarter.”