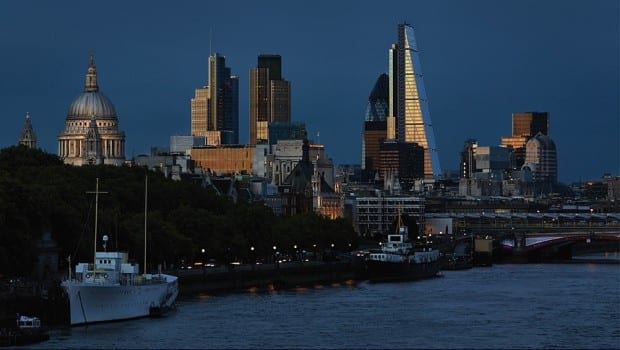 More hawkish remarks than usual from two US rate-setters, alongside hard-to-read Chinese credit statistics took markets lower on Thursday.
The president of the US Federal reserve bank of St.Louis, James Bullard, and the Richmond Fed’s Jeffrey Lacker said that the US central bank could conceivably see itself forced to raise interest rates at a faster pace than markets might be expecting.

So-called aggregate financing in Asia’s largest economy, the widest measure of new credit, came in at 476.7bn yuan for October, the least in 15 months, and left analysts divided in its wake.

Three month copper futures on the LME slid 2% to $4,838 per metric tonne. Oil futures continued their recent leg lower, giving back about 3% in late afternoon trading, following the most recent US government stockpiles data.

Draghi said the normalisation of inflation might take longer than had been envisaged, implying that new stimulus might yet be forthcoming. He said the ECB had always been clear that quantitative easing could run past the September 2016 deadline if its inflation target was at risk of being compromised.

His remarks weighed on the single currency, which fell promptly towards the 1.07 mark but later recovered to 1.0796, in a possible ‘risk-off’ move.

Back in the UK, house price growth accelerated in October. The Royal Institute of Chartered Surveyors’ monthly house price balance jumped to a reading of +49 from +44 in the month before compared with consensus of +45, close to August’s 15-month high of +53.

Nonetheless, the chief factor behind rising prices appeared to be the lack of new build.

Bank of England chief economist Andrew Haldane said the case for raising interest rates was still some way from being decided.

Rolls Royce warns, one broker fears Pearson will be next
Aerospace and engineering firm Rolls-Royce said earnings for the year will be at the low end of guidance as it downgraded its expectations for next year and warned of a possible cut to the dividend. The company reaffirmed its 2015 guidance but said profit for the year is expected to be at the lower of its £1.33bn to £1.48bn range.

Military hardware maker BAE Systems said it was is axing 371 jobs at its military aircraft unit and announced earnings per share for the year would be 38p as its export order book thinned. The company said it was slashing the jobs and slowing the production rate of its Typhoon fighter jet “to ensure production continuity at competitive costs over the medium term”.

Shares in education publisher Pearson fell sharply on Thursday following comments by chief executive officer John Fallon the previous day. Speaking at the Morgan Stanley European Technology, Media and Telecom Conference in Barcelona on Wednesday, Fallon said that when considering a capital allocation, the company’s first priority was to protect the dividend. Bloomberg cited Peel Hunt analyst Alex De Groote as saying that he expects Pearson to issue another profit warning in the next few weeks and then to cut the dividend.

Luxury retailer Burberry posted a rise in first half pre-tax profit but warned the market environment remains challenging. For the six months to the end of September, adjusted pre-tax profit rose to £153m from the same period last year, while revenue was unchanged at £1.1bn. Reported pre-tax profit was up 9% to £155m. In addition, the company said that since the start of the third quarter, comparable sales, although volatile, have improved overall relative to the second quarter.

Interim pre-tax profits at SAB Miller fell to $2.3bn from $2.82bn. Revenues were also down to $9.9bn from $11.3bn. EBITA fell to $2.9bn from $3.2bn. “Continued depreciation of key operating currencies against the US dollar has had an adverse impact on our results on both a translational and transactional basis. The adverse translational foreign exchange impact on EBITA in the period was $497m, with a further adverse transactional impact on margins,” the company said.

BHP was weighed down by a report in The Guardian that the Brazilian government might slap a fine on the Anglo-Australian outfit for the “environmental catastrophe” after a tailings dam part-owned by the firm broke.

Hospital group Spire Healthcare cut its full year revenue guidance as it said revenues from NHS Local contracts continued to decline in the four months to the end of October. The company said it now expects full year revenues to show growth of 3% to 3.7%, or between £882m and £888m, down from previous guidance of 4% to 6% or £890m to £907m.

IMI slumped on Thursday after the engineering company said it expects adjusted earnings for the year to be towards the lower end of the range of current market estimates amid challenging market conditions.

Shares in Morgan Advanced Materials slumped early on Thursday, after the carbon products and ceramic manufacturer warned its full year earnings will be at the low end of expectations, due to a challenging market environment.

Grafton Group has cut its operating profit outlook for the full year due to persistent tough conditions in the Belgian and UK markets. The builders’ merchant and DYI specialist said ongoing weakness in its Belgium operations has forced it to cut its operating profit expectations for 2015 by between 3% and 4%, as volume and margins have suffered in the region.

Bus and train operator Firstgroup posted a 33% drop in first-half pre-tax profit as revenue fell due to the loss of certain rail franchises and a later than normal start to this school year for US students. For the six months to the end of September, adjusted pre-tax profit came in at £22.4m from £33.3m in the same period last year, on revenue of £2.44bn, down 17%.

Car parts and bicycle retailer Halfords fell as it said interim pre-tax profit fell 6.3% to £49.6m as a poor summer deflated bike sales in July and August. Group like-for-like sales rose 1.7% to £533.5m but missed expectations of a 3% jump. New chief executive Jill McDonald said the company was implementing a new strategy called “moving up a gear” which will see the firm invest in collecting customer data and analytics.

Premier Oil slid after saying it was cutting full year capital expenditure to cope with a lower price environment that is hitting revenues across the sector, with further cuts expected next year. In a trading update, Premier said production averaged 57,000 barrels of oil equivalent a day (bpd) to the end of October, down from 64,000 bpd last year but in line with expectations and ahead of full year guidance of 57,000 bpd.

WS Atkins gained ground after reporting a jump in first half pre-tax profit as revenue increased thanks in part to an improvement in the UK and Europe. For the six months to the end of September, pre-tax profit rose 38% to £53.8m on revenue of £904.6m, up 8.8% from the same period last year. The design, engineering and project management consultancy said it saw a significant improvement in the UK and Europe and a strong performance in the Middle East.

US stocks ended in the red on Thursday, with weaker oil and metals prices taking their toll on the energy and resources sectors as investors digested comments from a series of Federal Reserve speakers.

Energy stocks suffered the brunt of the losses as oil prices tanked after the US Energy Information Administration reported a bigger-than-expected increase of 4.2m barrels in crude supplies for the week ended 6 November.

Elsewhere, although Fed chairwoman Janet Yellen failed to comment on the economy or make any hints as to the timing of a possible rate hike, other Fed speakers did.

New York Fed President William Dudley said in a speech that it was possible the conditions the Committee has established to begin to normalise monetary policy could soon be satisfied.

Initial unemployment claims were unchanged at 276,000 for the week ending on 7 November, according to the Department of Labor, compared with analysts’ expectations for a reading of 270,000.
“Claims are running about 7% below last year’s level, and no-one was complaining that layoffs were too high in the fall of 2014,” said Ian Shepherdson chief economist at Pantheon Macroeconomics.
“With indicators of hiring still extremely strong, outside the small manufacturing sector, claims are consistent with 250,000-plus payrolls.”

In company news, Macy’s declined after analysts at Credit Suisse cut their target price on the stock from $47 to $38, while department store Kohls surged after its sales and profit beat estimates.

PayPal was in the red after a Wall Street Journal report that Apple was in talks with US banks to develop a rival payment service.
In currency markets, the dollar gave back earlier gains, trading down 0.6% against the euro, 0.1% against the pound and 0.2% against the yen.

The great divide in property values is still growing between London and the rest of the UK – and that’s all the more reason to hold on to shares in Great Portland Estates, said The Telegraph on Thursday.
Rents at the investment trust were pushed up 6.5% in the six months to 30 September, largely due to what the newspaper’s Questor column described as “frantic demand for office and retail space” in the West End, where the large bulk of the trust’s portfolio is held.

Questor said the tight supply of property in the capital’s entertainment hub, as well as driving demand for space, should push rents higher still.

The column said investors have been laughing all the way to the bank, with sustained low interest rates and the UK’s steady economic recovery making for a heady tailwind.

But it warned that with the prospect of the Fed leading interest rate rises in December, the seas might turn somewhat rougher in the coming months.

That the international travel sector is, thanks to the Covid-19 pandemic, in a bit... END_OF_DOCUMENT_TOKEN_TO_BE_REPLACED

With a growing number of economists arguing there is a high chance we are... END_OF_DOCUMENT_TOKEN_TO_BE_REPLACED

While most still caveat the argument with the get-out clause it is far from... END_OF_DOCUMENT_TOKEN_TO_BE_REPLACED

Natural gas prices have rocketed with Russia accused of managing supply to drive up... END_OF_DOCUMENT_TOKEN_TO_BE_REPLACED

After their valuations boomed in 2020, the UK’s online fast-fashion giants of Asos and... END_OF_DOCUMENT_TOKEN_TO_BE_REPLACED