London-listed tobacco stocks British American Tobacco (BAT) and Imperial Brands yesterday saw a combined £6 billion wiped from their valuations after new broke the Biden administration in the USA is looking seriously at new rules to cut nicotine levels in cigarettes. White House officials are reportedly reviewing the policy around general cigarette sales in the U.S. as a deadline on a decision to try to ban menthol cigarettes looms this month. 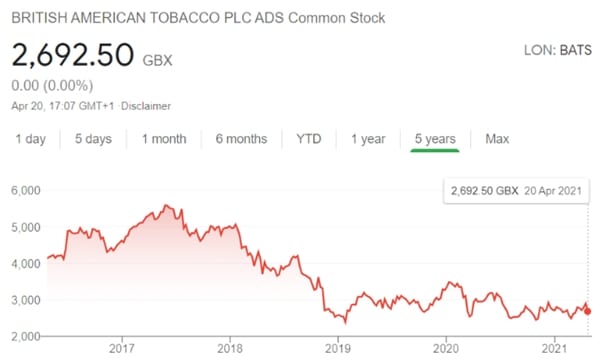 Tobacco stocks have been in the doldrums since 2017 when the FDA first raised the prospect of cutting the amount of tobacco in cigarettes. Despite serious doubts over the long-term sustainability of the tobacco industry, some stock market analysts have continued to champion the stocks, which are currently among the highest dividend payers in the FTSE 100.

Income generation qualities and future opportunities in the legal cannabis sector have helped put a floor under tobacco stock valuations despite concerns. But one analyst described the prospect of new legislation reducing tobacco content in cigarettes as potentially the “most significant and disruptive regulatory intervention in the modern history of the tobacco industry”.

BAT, which acquired U.S. peer Reynolds America in a huge $49 billion deal in 2017, relies on the USA for over half its total earnings, while Imperial brands makes 29% of its income in the country. JP Morgan analysts see BAT’s valuation and future prospects at especially significant risk due to its “heavy portfolio skew towards menthol”, which could be outlawed entirely due to the increased health risks that come from smoking the flavoured cigarettes.

Last year BAT realised almost £10 billion in profits on revenues of £25.8 billion. The company held a 35.3% share of the U.S. market in 2019, making it the sector’s second biggest player. Bristol-based Imperial holds a 9.4% share.

Pressure in the form of higher taxes and new regulations, like the introduction of plain packaging, has been weighing on the tobacco industry for a couple of decades now, as has growing awareness of the health risks posed by smoking. While it still isn’t clear if the new Biden administration will propose deep reforms, analysts are calling the rumours a “severe blow to tobacco”.

However, experts believe any deep reforms to the regulation around the industry are likely to be mired in legal challenges from big tobacco and take years to be fully implemented. The USA’s consideration of stricter tobacco laws follows on from similar proposals put forward in New Zealand last week that also focus on a sharp reduction in nicotine levels in cigarettes. The British government has also vowed to make the UK “smoke free” by 2030 with a new tobacco control plan set to be announced for England this year.

A spokesperson for Imperial yesterday questioned the new nicotine reduction policies being considered, saying there was “very little science and data around the effectiveness” of the potential for such a policy to reduce smoking levels. A BAT spokesperson added the company believes “there are better tools for improving public health through the acceleration of tobacco harm reduction”.