The London Stock Exchange’s main market, including the large and mid-cap benchmark indices of the FTSE 100 and FTSE 250 may be lagging much of the rest of the world in the pace of their recovery from the Covid-19 sell-off but the junior AIM market is showing them the way.

Since it was established in 1995 to offer smaller companies many of the advantages going public on the main exchange, but with looser rules making doing so less expensive, the AIM has struggled to deliver meaningful returns. But a strong rally since the end of May has seen the AIM all but recover to its February 20th high. 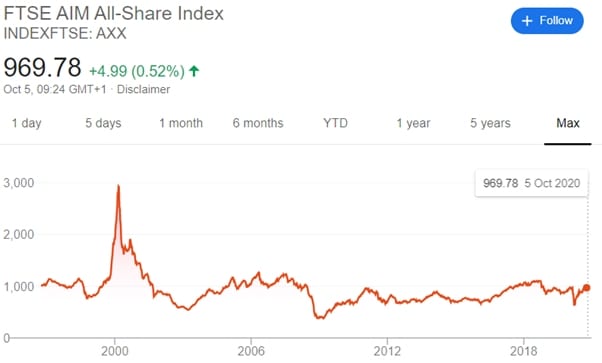 Over in the USA, the major benchmark indices have, in the case of the S&P 500 and Dow Jones industrial average, recovered to near to their February highs, or, in the case of the tech-centric Nasdaq, recorded recent new highs. Other major stock markets in Europe and Asia have not clawed back all of their losses but are closer to early year highs than the UK’s major benchmark indices. The FTSE 100 is still 20% off its early 2020 highs.

Not so the AIM All-Share index, which tracks all of the companies listed on the junior market. It is now less than 0.5% off its January 2020 opening level. It has rallied 62% from its low point at the peak of the March sell-off.

The AIM is sometimes referred to as the LSE’s enfant terrible thanks to its lighter regulations. While opening the door to public markets cash that would otherwise be too expensive or onerous from a regulatory point of view for smaller companies, the looser rules of the junior market have occasionally led to controversy. Insurance group Quindell, once the most valuable company on AIM, and Patisserie Valerie, have both been found guilty of financial irregularities.

However, this year many of the smaller companies listed on AIM have surged in value, most notably those in the biotechnology space, many of whom are involved in either the hunt for a Covid-19 vaccine, treatments for those suffering from the virus, or testing and diagnosis.

The share price of AIM company Avacta, which developed a popular Covid-19 yest, have surged by 816% this year. However, that’s nothing compared to the 4000% gain achieved by Novacyt, which was one of the first biotech companies to start to work on a test for the virus. Omega Diagnostics, another AIM company involved in Covid-19 testing, has seen its value increase almost fivefold.

While some of the biggest gains of AIM companies can be at least partly put down to being in the right place at the right time to make money from the pandemic, the junior market also contains a lot of technology companies. One of the main reasons the FTSE 100 has struggled compared to the major U.S. indices is a lack of large British technology companies, with the sector being boosted by the increased digitalisation enforced by lockdown restrictions. It is dominated by ‘old economy’ companies such as oil and gas companies, miners, traditional retailers and big banks.

The AIM, on the other hand, is chock full of promising tech companies, which have thrived, even if they are much smaller than the technology giants of the USA. Technology is the sector with the heaviest weighting in the AIM All-Share, followed by healthcare. The junior market also hosts Asos and Boohoo, two of the UK’s most successful, and now valuable, online retailers. Asos is up by 53% so far over 2020, while Boohoo is gained 28% despite a scandal over working conditions within its supply chain.

With the number of ‘armchair’ retail investors also growing over lockdown, that too seems to have benefitted AIM stocks. The junior market has a habit of attracting smaller private investors willing to take a risk on the ‘AIM casino’.

“There has been quite a significant recovery in retail activity on Aim — exactly the same has happened in the US. People who have savings have been at home, they’ve been stuck in front of their screens and they’re trading more.”