London Stock Exchange is reportedly on the verge of the acquisition of market data company Refinitiv for £21.8 billion. Refinitiv is currently owned by Thomson Reuters and U.S. private equity giants Blackstone. The deal mooted would see Refinitiv’s current owners retain a 37% stake in the company but through share classes that would leave them with less than 30% of the voting rights. If it goes through, the new market data arm would put LSE into direct competition with Bloomberg.

Talks between LSE and Refinitiv come a year and a half after Blackstone bought a majority interest in the company from Thomson Reuters and the development was first reported by the Financial Times late last week with further details emerging over the weekend. London Stock Exchange has told shareholders that it plans to fund the deal through a new share issue.

Refinitiv is Bloomberg’s biggest competitor in providing the terminals that professional traders and investors use for access to breaking financial markets news. It would be a new direction for the company, whose primary focus has always been running stock market exchanges. As well as the London Stock Exchange, the group also owns and manages Italy’s main bourse, the Borsa Italiana in Milan, and a handful of specialist facilities including the Turquoise equities trading platform.

LSE believe the acquisition would lead to annual cost savings of £350 million a year within five years, as a result of not having to pay for market data as a client. It’s also part of a broader strategy for the company to develop its capacities as a ‘financial market infrastructure provider’. The move comes after the £242 million January acquisition of Euroclear, Europe’s largest trading settlement company.

It’s a bold move by LSE CEO David Schwimmer, the form Goldman Sacks executive, who took over the job last April from Xavier Rolet. Rolet had held the position for 8 years but took the decision to step down following pressure from the board led by then chairman Sir Donald Byron. The combined group’s revenues would be about £6 billion, based on current sales. 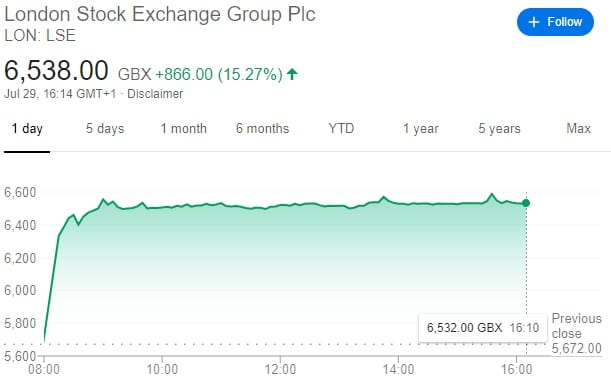 Markets clearly approve with the London Stock Exchange share price up over 15% late on Monday. The company’s stock has been on a solid upward trend since 2010, with its value gaining almost 1000% since the beginning of the current decade.