Denmark’s Maersk, the world’s biggest shipping company and worth almost $55 billion (£40 billion), is to invest $1.4 billion in eight new freight vessels able to run on carbon-neutral methanol. The company said the first of those ordered is due to be built and operational by 2024, meaning it will be able to

The new freight ships will, however, have dual-fuel capacity and will also be able to run on traditional fuel. That is necessary, says Maersk, because

“sourcing an adequate amount of carbon neutral methanol from day one in service will be challenging”.

With as much as 90% of global trade being shipped at some point across its supply line journey, reducing shipping emissions, which account for 3% of all carbon dioxide emissions, reducing the industry’s environmental impact is important. The shipping sector’s emissions are similar to those of the aviation industry.

The UN shipping agency, the International Maritime Organisation (IMO), aims to reduce shipping emissions to 50% of their 2008 levels by 2050. Freight companies transitioning to carbon neutral fuels will be a major part of that. In total, Maersk owns 301 vessels and charters another 405.

The Danish company said its investment in its new carbon neutral fleet is a response to customer demand for more environmentally friendly shipping. Many of its largest customers have set their own carbon reduction targets and cutting transport emissions is key to those being achieved. Maersk commented major clients including

“H&M, Amazon, Microsoft, Unilever and Procter & Gamble had all committed to actively use and scale zero-carbon solutions for their ocean transport”.

Maersk, whose share price has soared by almost 85% over the past 12 months as freight prices have rocketed, announced back in February it had commissioned the world’s first dual-fuel container ship. The feeder vessel, which carries cargo to be loaded onto the largest freight ships, can carry 2100 shipping containers and is planned to start operating along the Baltic shipping route in 2023. 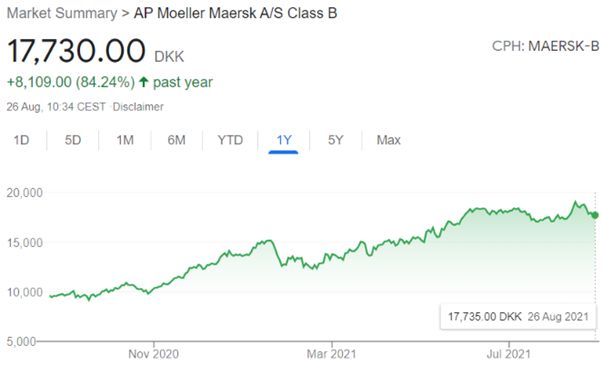 The new order announced by the freight company yesterday is for 8 much larger vessels, each able to carry up to 16,000 containers. Each ship will come at a cost of $175 million, which represents a premium of around 10% to 15% on similar vessels that run on standard bunker fuel. The company has an option to add another 4 vessels to the order in 2025.

The new ships will replace older models due to be decommissioned, saving around, estimates Maersk, 1 million tonnes of CO2 annually. Last year the company was responsible for around 33 million tonnes of carbon dioxide emissions.

Carbon neutral methanol is produced by combining renewable energy with biogenic carbon dioxide, which can be produced from biomass. However, there is currently very limited global production capacity. A new plant is planned for construction in Denmark and it should be able to provide enough fuel for the first feeder vessel. However, capacity will need to be extended significantly to fuel the new fleet of larger vessels.

“This order proves carbon neutral solutions are available today across container vessel segments and that Maersk stands committed to the growing number of our customers who look to decarbonise their supply chains.”