Retailer Marks & Spencer’s share price rose by almost 4% today as the company appointed Richard Price of Tesco as the latest boss of its long struggling clothing business. Mr Price, who currently in charge of Tesco’s F&F clothing division and previously held the role of managing director of BHS, will join M&S next year. 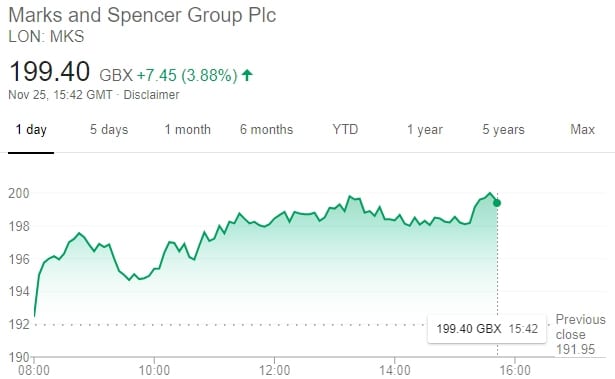 He replaces Jill McDonald, last week appointed the new head of Costa Coffee. She was relieved of her M&S position in July after overseeing a disastrous logistics miss-calculation that saw insufficient numbers of a new line of denims. The range had been heavily promoted by an advertising campaign fronted by the popular television presenter Holly Willoughby but customers were left disappointed when M&S stores quickly ran out of some sizes. She held the role for less than two years. Steve Rowe, the company’s chief executive, has described the stock shortages as the “worst [he had] ever seen”.

Marks & Spencer’s clothing was once a staple of more mature, middle class wardrobes but has fallen out of favour amid increased online and offline competition and a failure to remain contemporary. Several turnaround attempts that tried to reposition M&S’s clothing ranges to also appeal to a younger, more fashion-conscious demographic have broadly failed. Mr Price will be the latest in a long line of heads of the division to try to hit upon the magic formula.

M&S’s most recent set of quarterly results underline the task that awaits Mr Price when he takes up his new position next year. Over the six months that ended September 28, group revenues fell by 2.1% despite growth of 0.9% in food sales. That was undermined by a 5.5% drop in clothing and home sales.

Mr Price certainly has experience in retail, with over 3 decades now under his belt. He spent the 15 years of his career with fashion retailer Next, where he climbed the ladder of merchandising roles – the position in fashion retail that is specifically dedicated to optimising stock orders and placement in stores with a view to minimising unsold items that then have to be discounted, while avoiding popular lines and sizes running out. In 2005 he moved to M&S where he rose to trading director for men’s fashion in 2008 before a 2012 move to BHS as managing director. The department store chain no longer exists. In 2015 he moved to Tesco and the recent announcement marks his impending return to M&S.

He commented on his previous decision to move on from his new company, while explaining why he believes the time is now right to make his return:

“I left the business [M&S] because I felt it was drifting in the wrong direction but now feel we have a real chance to make it special again. The new team has already started to improve product and value and I am looking forward to working with them.”

Marks & Spencer CEO Mr Rowe explained the decision to appoint Mr Price as based on his experience, commenting that his career “spans some of the UK’s top clothing brands” and that he has a “proven track record of delivering growth through stylish, great-value product”.

Investing 250k For Income? A Guide To Your Options And Strategy Ideas

Natural gas prices have rocketed with Russia accused of managing supply to drive up... END_OF_DOCUMENT_TOKEN_TO_BE_REPLACED

After their valuations boomed in 2020, the UK’s online fast-fashion giants of Asos and... END_OF_DOCUMENT_TOKEN_TO_BE_REPLACED

The dust has almost settled on the months-long takeover battle between U.S.-based private equity... END_OF_DOCUMENT_TOKEN_TO_BE_REPLACED