If anyone thought the greater public awareness around healthy eating that has evolved over the past couple of decades would spell bad news for the big fast food chains, think again. Yesterday, McDonald’s reported its fastest pace of growth in over ten years as it glided past the $100 billion in revenues threshold for the first time in its history and nonchalantly beat analyst estimates. 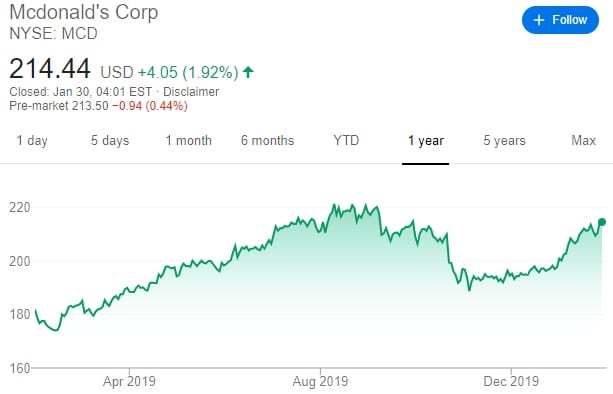 Like-for-like sales generated by McDonald’s restaurants around the world rose by 5.9% in 2019 compared to 2018. 5.9% was also the growth rate seen over the fourth quarter of 2019, against the consensus estimate of 5.2% Wall Street analysts had forecast.

McDonald’s is now valued at over $160 billion, making it comfortably the world’s largest fast food, or any, restaurant chain by revenue, outlets and market capitalisation. Founded in 1940, McDonald’s now runs 38,000 restaurants and outlets internationally. The first McDonald’s opened in the UK in 1974.

The company has, however, moved with the times. It is currently updating its technology with the integration of digital ordering systems and expanding its home delivery service. Menus have also been updated, offering a good choice of healthier options such as salads and low calorie wraps, alongside the traditional staples of Big Macs, cheese burgers, McChicken sandwiches, McChicken Nuggets and fries.

McDonald’s was, until recently, run by a British CEO, Steve Easterbrook. However, Mr Easterbrook lost his job last November over an affair with a colleague. The company has a strict policy on romantic entanglements between employees. His position was taken over by 51-year-old American Chris Kempczinski. He fronted yesterday’s results announcement, with his most significant contribution informing investors that the company would be ramping up its spending on research and technology over the course of 2020.

Mr Kempczinski is known as an ardent cheerleader for increased investment in R&D, both in the area of menu development as well as McDonald’s business model and processes. He believes the company has to invest more to maintain its place at the head of the table among increasing competition from food delivery apps and services such as Deliveroo and Uber Eats.

One negative among the results published yesterday was a 1.9% year-on-year slide in the number of guests visiting McDonald’s restaurants in its domestic US market. Kevin Ozan, the company’s chief financial officer, admitted that it has an “aggressive battle for market share”, on its hands in the USA and beyond. And while expanding the home delivery service is a priority, Mr Ozan stated that it was superseded by the “top priority”, of a return to guest count growth.

McDonald’s Q4 profit increased to $1.57 billion from $1.42 billion over the same period a year earlier, on the back of revenues of $5.35 billion. That was an improvement from $5.16 billion in 2018. Full year profit also grew, but with a modest bump up to $6 billion from $5.9 billion. Full year revenue growth was similarly incremental, up to $21.1 billion from $21 billion. Revenues including franchised restaurants, as well as company-owned outlets, totalled $100.4 billion.