The McDonalds’ share price plunged yesterday, wiping $4 billion from the fast food giant’s overall value following the Sunday announcement that British CEO Steve Eastbrook had been fired for engaging in a romantic relationship with a colleague against company policy.

It is, however, the rapid fall from grace of Mr Easterbrook that has spooked investors, having been credited with almost doubling McDonald’s value after taking up his role in March 2015. Before a correction that started to take hold in September, the company’s market capitalisation had increased from $95 billion to $170 billion under the CEO’s watch. Yesterday the McDonald’s share price lost 2.7% to close at $5.28. 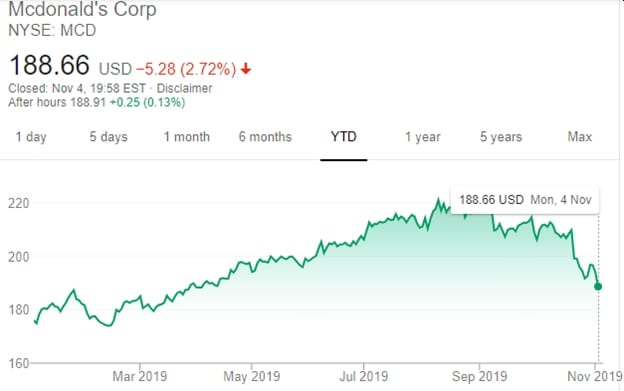 A Sunday announcement broke the news that Mr Easterbrook had been relieved of his duties on Friday as a result of breaching the company’s strict business standards policy, which forbids romantic relationships between employees. He will however, be given a golden handshake of 6 months of pay. That could be topped up significantly after the company’s compensation committee assesses his performance and the value of stock awards. He will be allowed to retain stock awards with a vesting date of up to three years after his departure but will be relieved of those with later maturity dates. In 2018 Mr Easterbrook took home $15.9 million in salary and bonuses. In 2017 his remuneration reached $21.9 million.

Under the terms of his contract, Mr Easterbrook will also not be allowed to take up a position with any dining business considered to be a McDonald’s competitor. Costa, Greggs, Caffe Nero, Burger King, KFC and Pizza Hut were among those specifically named.

While that will limit Mr Easterbrook’s choices if and when he does return to the fray of corporate life, his overall record at McDonald’s is almost certain to mean he won’t be short of offers despite the drama of his departure. Wells Fargo analyst Jon Tower described him as a “change agent” whose leadership, particularly when it comes to difficult decisions, “will be missed”.

There are also concerns the amount of recent change at the top for McDonald’s could see the company lose momentum.

McDonald’s business policy on inter-company romantic relationships may sound draconian from a British perspective, but is far from unique among large American companies, who often have strict policies on the matter. The McDonald’s policy reads:

“Employees who have a direct or indirect reporting relationship to each other are prohibited from dating or having a sexual relationship. It is not appropriate to show favouritism or make business decisions based on emotions or friendships rather than on the best interests of the company.”

In announcing his departure to staff through a Sunday email, Mr Easterbrook wrote:

“This was a mistake. Given the values of the company, I agree with the board that it is time for me to move on.”

A lawyer further commented on his behalf:

“He acknowledges his error in judgment and supports the company’s decision.”

Chris Kempczinski, McDonald’s head of U.S. operations, will succeed Mr Easterbrook as the new McDonald’s CEO. He has already stated that he is not currently planning any “radical, strategic shift” from the course the company was on under Mr Easterbrook.

Natural gas prices have rocketed with Russia accused of managing supply to drive up... END_OF_DOCUMENT_TOKEN_TO_BE_REPLACED

After their valuations boomed in 2020, the UK’s online fast-fashion giants of Asos and... END_OF_DOCUMENT_TOKEN_TO_BE_REPLACED

The dust has almost settled on the months-long takeover battle between U.S.-based private equity... END_OF_DOCUMENT_TOKEN_TO_BE_REPLACED