The Meta Platforms share price plunged by over 22%, wiping out more than a fifth of the Facebook owner’s market value in after hours trading. The slump was catalysed by a combination of the company warning of an expected slowdown in “real world” advertising and forecast revenues of between $27 billion and $29 billion for the first three months of the year when analysts had been expecting $30 billion.

Another negative, at least from the perspective of investors, is that Meta said its profit figure this year would be around $10 billion lower due to investment in the metaverse – the immersive virtual world accessed via virtual reality Meta believes we will soon be spending considerable time in and is betting heavily one. 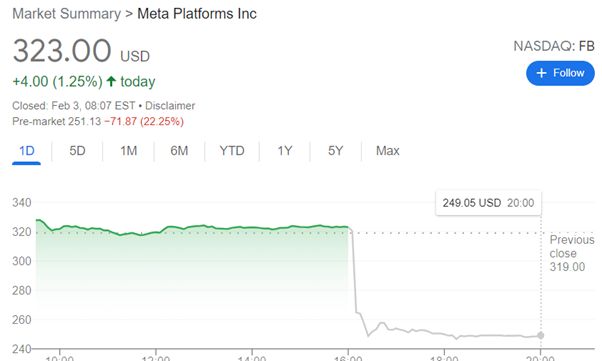 Investors apparently remain at least somewhat sceptical Meta’s grand vision of the metaverse will become a profitable reality. At least within the next decade. There is concern the extent of the focus on the potential of the metaverse may impact on the company’s shorter to midterm performance, with no guarantees the investment will pay off.

However, the biggest factor was a surprisingly steep drop off in quarterly earnings alongside a warning users of Meta’s social media platforms and chat apps, Facebook, Instagram, Messenger and WhatsApp, are spending less time in its ecosystem. Or more specifically, engaging with it in a way that is profitable to Meta.

The company is also expecting recent changes to Apple’s privacy rules, that limit way advertisers can follow users of the tech giant’s iPhones and other devices around the web. Shockwaves emanating from the report rippled out, hitting the valuations of other social media companies. The Snap share price fell 17.2% while Twitter declined 8.6%. Google-owner Alphabet, whose own valuation gained over 7% yesterday after its own positive earnings report a day earlier, it also makes most of its money from digital ad spend, has dipped by just 1% in after hours trading.

Meta has had a tough time of it recently amidst accusations its platforms harm children, deepen social division and even pose a threat to democracy. None of that, however, stopped the company’s total revenue growing 20% over the quarter year-on-year to $33.7 billion. However, net income (profit) was down 8% to $10.3 billion over the calendar year.

While daily active users were up 5% for the year, totalling 1.93 billion as of the end of 2021, Meta said it has seen a “shift in engagement” which is seeing users spend more time in less profitable corners of its apps, such as Instagram’s Reels video feature. Chief financial officer Dave Wehner also noted “increased competition for people’s time”.

He also said the company had been

“hearing from advertisers that … cost inflation and supply chain disruptions are impacting their budgets”.

One silver lining was Meta’s augmented and virtual reality hardware business, which sells the Oculus VR headsets and accessories, seeing revenues rise 22% to $877 million. However, the division’s operating losses widened to $3.3 billion from $2 billion. Meta doesn’t expect the business to be profitable “any time in the near future”.