The share price of Metro Bank, the UK’s first new bank in 100 years when it opened its doors in 2010, was yesterday routed as it plunged 35.8% to a new low of 175p. Despite a mild 2% recovery today, the bank’s market capitalisation now stands at less than £308 million. Its valuation reached a high of £3.5 billion as recently as March of 2018 but now sees its future as a viable independent business concern thrown into doubt. 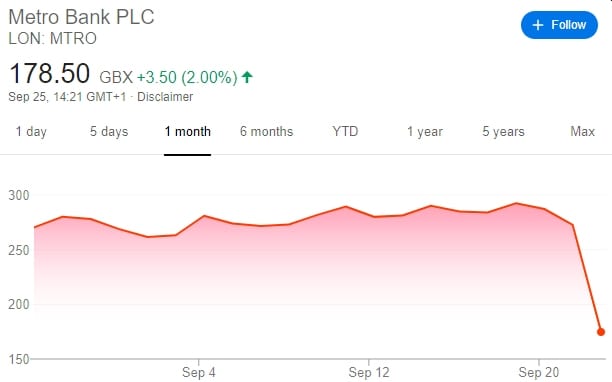 Yesterday’s run on Metro’s stock followed an announcement by the bank that it had cancelled a bond issue it had hoped would raise the £250 million in re-capitalisation the UK’s banking regulator had insisted upon. That has piled fresh misery on top of the risk of a regulatory investigation into a £900 million error in its accounts exposed in January, potential legal claims on behalf of shareholders and a difficult economic environment compounded by ongoing record low interest rates hitting the revenue of lenders.

It’s a sharp fall from grace for Metro, which has done much to shake up high street retail banking in the UK. The conveniently long opening hours that meant customers could visit their branch in the evening after work and high levels of customer service across its 70 branches forced rivals into upping their own game after Metro was launched by eccentric American businessman Vernon Hill. Hill was forced by investors to step down as Metro Bank’s chairman in the summer. The move was portrayed as a mutual decision with the bank releasing a statement saying Hill “believes that the bank has now reached a size and scale where it is appropriate to appoint an independent chair.” However, the reality is that Mr Hill was pushed rather than jumped after the accounting scandal saw customers lose confidence and pull over £2 billion held with Metro.

This week’s disaster was caused by a lack of investor interest in the bond issue, with concerns over the level of risk involved and the fact that the coupon offered was perceived as a poor reflection of that risk. The terms of the bond issue also stated that the debt could be converted into equity should the bank run into difficulties.

The tough sell of the debt wouldn’t have been helped by the fact the bond prospectus admitted the FCA and Prudential Regulatory Authority (PRA)’s investigation into the accounting error had been extended to senior management, which could lead to either “criminal and/or civil liability for the bank” or even the revocation of its banking license. It warned that regulatory sanction “may involve significant expense”.

Analysts and industry experts believe that Metro could now be left with little option but to look for a buyer. That would most likely be a larger bank allowed to use its own capital requirements model, meaning less capital than is currently the case would have to be held against Metro’s loan book. Lloyds, Royal Bank of Scotland, HSBC and Barclays would all fall into that category, though an approach by Lloyds could face competition scrutiny from regulators.

However, Metro’s share price may have to fall further to make the bank an attractive acquisition against the backdrop of regulatory investigations and a generally tough environment for retail banking.

Another possible exit from its currently perilous position could be a new move to launch a bond issue after Metro releases its third-quarter results on October 23. The Financial Conduct Authority and Prudential Regulation Authority are monitoring the situation.

Canadian dollar edges up as BoC rates expected to stay

A little over a week into 2022 we’ve already experienced some major market movements.... END_OF_DOCUMENT_TOKEN_TO_BE_REPLACED

One of the FTSE 100’s current disadvantages, when it has come to attracting international... END_OF_DOCUMENT_TOKEN_TO_BE_REPLACED

Did you know you could build wealth by investing in Lego? A study suggests... END_OF_DOCUMENT_TOKEN_TO_BE_REPLACED

With most major stock markets around the world spending time at or near record... END_OF_DOCUMENT_TOKEN_TO_BE_REPLACED

For years, Baillie Gifford’s technology funds have been driving outsized returns for the mainly... END_OF_DOCUMENT_TOKEN_TO_BE_REPLACED