The Metro Bank share price leapt by 29% yesterday after it was announced a takeover offer has been tabled for the challenger bank by the American private equity company Carlyle.

It was generally a tough day for London-listed banking stocks with Barclays, Lloyds and NatWest all falling by between 4% and over 5% yesterday after the Bank of England took the surprising decision to maintain interest rates at 0.1%. A 15-basis-points. However, Metro Bank escaped the sell-off thanks to the bid by Carlyle. 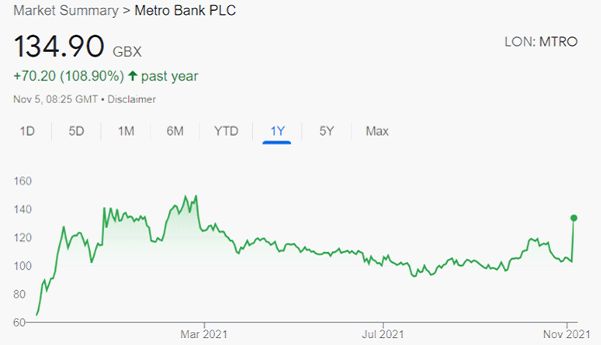 However, Metro Bank’s attraction to Carlyle is presumably the significant discount at which it currently trades at compared to its book value. Even after yesterday’s surge in the bank’s market capitalisation from £177 million to £236 million, the company looks like a bargain when that is set against equity capital of £1.1 billion.

The move by Carlyle, whose last attempt to acquire a UK company was its failed bidding war with tobacco giants Philip Morris for inhaler company Vectura which concluded in September. It’s also another sign banking sector M&A activity is heating up after Co-operative Bank made a recent approach for TSB. The Co-op bank is owned by a consortium of hedge funds.

Carlyle, which has declined to comment on its approach for Metro, has until December 2 to make an offer for the bank or walk away.

Metro listed on the London Stock Exchange at a £1.6 billion valuation in 2016 but has since struggled. There were almost immediate questions raised over that valuation and the bank’s share price has been in the doldrums since a 2019 accounting scandal over how risk was categorised across its loan books. The FCA is still in the process of investigating that accounting mix-up.

The bank, founded by Vernon Hill in 2010 in the aftermath of the international financial crisis made a £110 million loss over the first half of the year. Having become the first new UK bank in 100 years, it has since attracted 2 million customers and holds £16.4 billion in deposits. However, early success as a challenger bank founded on better service and conveniently located branches has since given way to the struggle to achieve profitability and treading a fine line with its strength of capitalisation.

Last year Metro Bank acquired the peer-to-peer consumer lending platform Ratesetter in a bid to improve its loan book growth. A £3 billion mortgage book was also sold to NatWest to release capital for deployment in higher-margin lending. Citi analysts believe that while Metro Bank is far from out of the woods it has demonstrated it has a path to profitability.

One potential issue for Carlyle is the view regulators may take of its bid after a distinct lack of enthusiasm for a bid by private equity firm Cerberus Capital Management.