Microsoft’s share price gained over 4% in afterhours trading yesterday, adding to the 1.56% it added during the day’s session, as the software giant became the latest major tech company to surpass analyst expectations on revenue growth. The company’s commercial cloud computing arm, Azure, proved to be the engine for the forecast-beating Q2 rise in revenues, up 39% on the same period a year earlier. 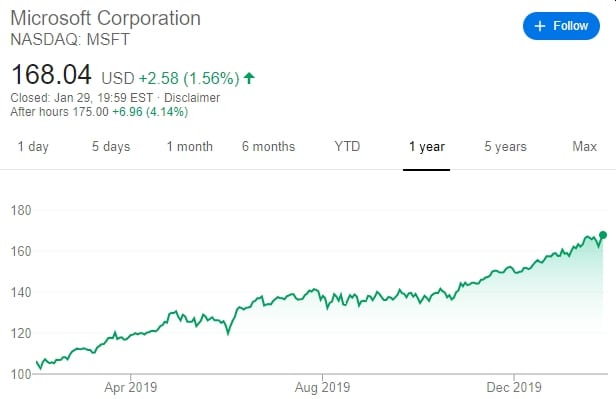 Cloud computing brought in $12.5 billion in quarter two, just $700 million behind Personal Computing. Even a spectacular drop-off in growth would see it become the largest revenue generator for Microsoft within the next several months. But growth is expected to remain strong for several years to come as much of the world’s economy moves to a cloud computing infrastructure.

Across the sector, the compound annual growth rate is expected to average 18% over the five years between 2018 and 2023, reaching a global value of $623.3 billion. 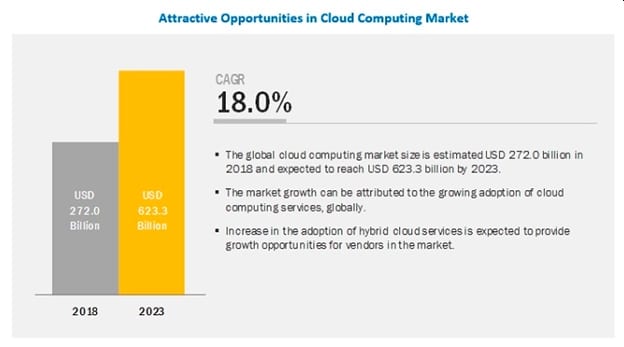 As the second largest public cloud services provider by market share, behind only Amazon’s AWS, and growing faster than its larger competitor, Microsoft Azure will hope its growth with be ahead of the overall market’s. 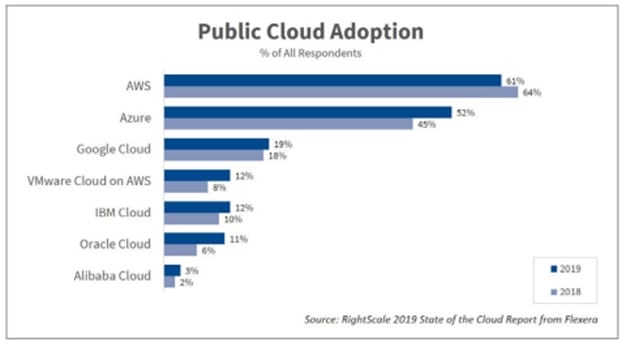 Source: RightScale 2019 State of the Cloud Report from Flexera

Cloud adoption is being driven by a rise in computing power and storage requirements across the economy. A surge in the number of connected devices, known as the Internet of Things (IoT), is also a major driver. That trend will continue at pace, with the introduction of autonomous vehicles expected to bring an inflection point.

Another positive for Microsoft has been the growth of its hardware business, driven by the success of its Surface range of laptops. Revenues from the Surface unit grew 6% to $1.9 billon.

Overall, Microsoft reported profits of $11.6 billion during the second quarter of its fiscal 2020 calendar, up 38% from a year ago. Those figures were achieved on revenue of $36.9 billion, up 14% from the same period during the company’s fiscal 2019 calendar.

“We are working to ensure the technology we build is inclusive, trusted and creates a more sustainable world.”

A little over a week into 2022 we’ve already experienced some major market movements.... END_OF_DOCUMENT_TOKEN_TO_BE_REPLACED

One of the FTSE 100’s current disadvantages, when it has come to attracting international... END_OF_DOCUMENT_TOKEN_TO_BE_REPLACED

Did you know you could build wealth by investing in Lego? A study suggests... END_OF_DOCUMENT_TOKEN_TO_BE_REPLACED

With most major stock markets around the world spending time at or near record... END_OF_DOCUMENT_TOKEN_TO_BE_REPLACED

For years, Baillie Gifford’s technology funds have been driving outsized returns for the mainly... END_OF_DOCUMENT_TOKEN_TO_BE_REPLACED