Microsoft leapfrogs Apple as most valuable company in the world

Gains of almost 7% for the Microsoft share price last week has driven the company’s valuation above Apple again, making it the world’s most valuable company with a market capitalisation of $2.49 trillion to Apple’s $2.47 trillion. While the difference is so slight it could easily flip again this week, Apple is expected to continue to face supply chain issues over coming months that resulted in its share price dipping last week.

Microsoft’s digital products and services do not face the same issues, which could allow it to pull away from its big tech rival if supply chain problems hit Apple’s ability to manufacture at full capacity and get devices into the hands of consumers. The last time Microsoft was the most valuable company in the world was 2019. At the time it was Saudi Aramco, the Saudi Arabian state oil company with a small amount of its equity floated in Riyadh, that knocked it off top spot. 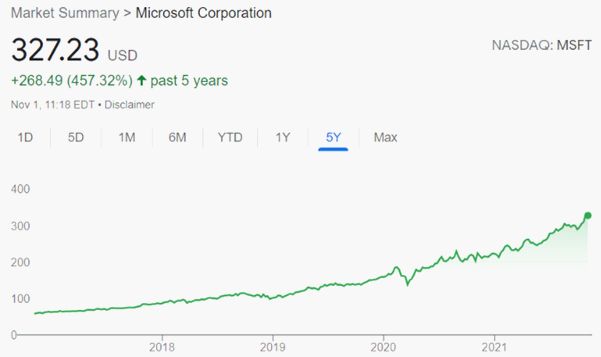 Both Apple and Microsoft, which have competed for the no.1 spot for most of the last decade, have now overtaken Saudi Aramco’s valuation despite its recent boost from climbing oil prices. Their valuations steamed ahead of the oil company last summer and currently maintain a safety margin of almost half a trillion dollars.

Microsoft’s latest quarterly results revealed sales over the three months to the end of September that comfortably surpassed analyst estimates. Apple’s share price fell last week after it predicted component shortages, which it said had reduced sales by $6 billion last quarter, are likely to worsen in the lead up to Christmas.

As well as its popular productivity suite Microsoft Office and the Microsoft Windows operating system, Microsoft owns the rapidly growing cloud computing business Azure and professional networking site LinkedIn. It has been a public company since 1986.

Apple, which still makes the majority of its income from iPhones despite successfully building up revenues from services in recent years became the first public company to hit both $1 trillion and $2 trillion valuation, achieved in August 2018 and August 2020 respectively. It first leapfrogged Microsoft as the world’s most valuable company 10 years ago. Since then the pair have swapped positions regularly as their share price gains have ebbed and flowed.