The Microsoft share price shed another 2.85%, taking losses for the year to almost 14%, despite the company announcing a 20% increase in revenues and profit. What would normally be seen as impressive year-on-year growth disappointing markets is another sign of just how perilous the position of the most valuable growth companies in the world has become.

Strong growth is now longer enough to support stretched valuations with Microsoft’s downward slide yesterday attributed to growth in the cloud services sales failing to meet the top end of analysts’ forecasts. Despite that, it was still the Microsoft Azure cloud computing business that fuelled much of Microsoft’s growth last year. 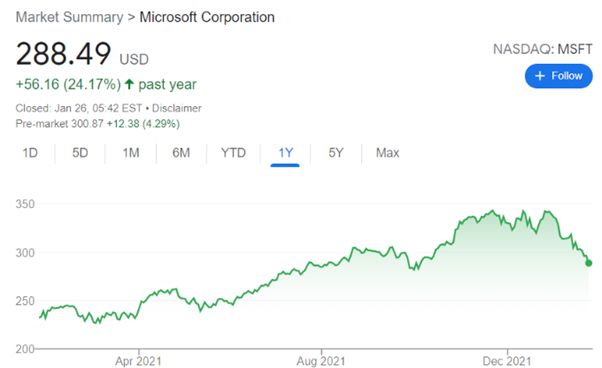 The company’s 2021 earnings report was releases yesterday, exactly a week on from the announcement Microsoft had, subject to regulatory approvsal, agreed to buy the computer games publisher Activision Blizzard for $68.7 billion. If the deal goes through it will be not only Microsoft’s largest ever but the largest ever acquisition by Big Tech.

Total group revenues rose to $51.7 billion for the three months to the end of the year – a 20% improvement on the same period a year earlier. That produced net income of $18.8 billion, a 21% improvement on 2020.

Microsoft’s chairman and chief executive Satya Nadella reflected on how the general global digital transformation was supporting the company’s growth with:

“Digital technology is the most malleable resource at the world’s disposal to overcome constraints and reimagine everyday work and life. As tech as a percentage of global GDP continues to increase, we are innovating and investing across diverse and growing markets.”

Most analysts and investors still see Microsoft as a very solid long term prospect despite the share slide this year, which has followed the general trend of markets reducing their exposure to expensive-looking growth stocks as inflation and interest rates rise. Many see the 13% drop in the company’s value since the beginning of the year as a buying opportunity.

Indeed, markets may have already decided yesterday’s sell-off of Microsoft stock represented over-selling with after-hours trading indicating the share price will open over 4% up today, reclaiming yesterday’s losses and some. Markets have been generally volatile since Monday on concerns around the pace of Fed interest rates rises and worries about the potential for military conflict between Russia and Ukraine. The Fed meets today and is expected to announce its plans for interest rate hikes.