The Microsoft share price is up a little over 3% in early trading today after the surprise announcement of a record-breaking $75 billion agreement to buy the video game publisher Activision Blizzard. The latter’s share price, which has recently suffered heavy losses, rocketed up by over 25% yesterday after news broke while Microsoft’s initially slid 2.4% before today’s recovery.

The deal, which would be the largest takeover ever by one of the USA’s tech giants, will have to be approved by both Activision Blizzard’s shareholders and regulators before it is rubberstamped. If it does go through it will create the world’s third largest gaming business after Japan’s Sony and China’s Tencent. 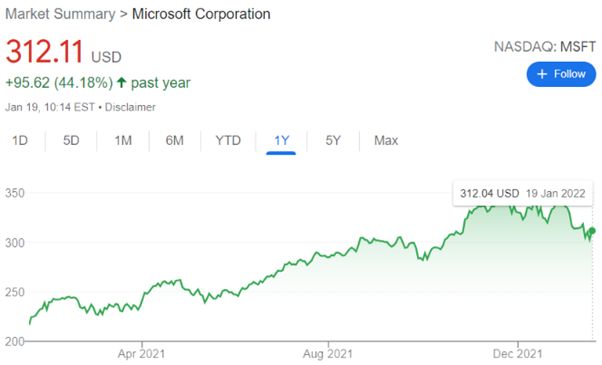 But Microsoft’s strategic goal in pursuing the deal is not today’s gaming market, as lucrative as it is. That’s just a bonus. What Microsoft is really interested in is the metaverse, describing the deal as an acquisition of the future immersive digital world’s “building blocks”.

The $75 deal includes Activision’s current net cash balance of $6.37 billion, valuing the company at $68.7 billion, or $95-a-share. The games publisher’s share price closed at $65.39 last Friday, meaning the offer represents an enticing premium to convince investors. Microsoft is worth $2.34 billion.

Activision Blizzard is one of the world’s most successful games publishers and is behind titles including Call of Duty, Candy Crush, World of Warcraft and Crash Bandicoot. The Californian company was founded in 1979 and its games are played by over 400 million people in 190 countries. However, it has recently suffered from negative PR around a gender-bias lawsuit filed by California regulators who allege female staff among the roughly 9500 employed by the company were paid less than male counterparts. And that they were subject to “unwanted sexual advances” from male colleagues.

Despite the controversy, Activision chief executive Bobby Kotick is expected to remain in his role at least until the deal with Microsoft is completed. However, beyond that it remains unclear. Microsoft has suffered from its own issues with co-founder and former CEO Bill Gates accused of unprofessional conduct during the period in which he held an active role at the company.

There has been notably heightened M&A activity in the gaming sector recently. Last week it was announced that Grand Theft Auto publisher Take-Two Interactive is to buy the mobile gaming developer Zynga for $12.7 billion.

“Gaming is the most exciting category in entertainment today and will play a key role in the development of metaverse platforms. We’re investing deeply in world-class content, community and the cloud to usher in a new era of gaming that puts players and creators first and makes gaming safe, inclusive and accessible to all.”