Miners down as copper slips again 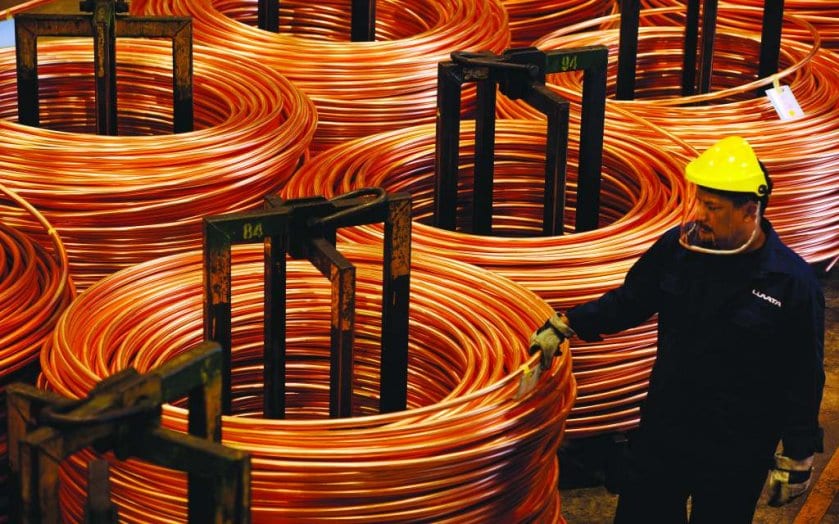 Investors stayed on the sidelines, deterred by weak inflation data out of China and as the Prime Minister laid out his conditions to Brussels for Britian to remain within the UK.
The Footsie finished off its lows of the session, down by 19.88 points or 0.32% at 6,275.28.
Miners were at the bottom of the pile on the top flight index on the back of downbeat research notes out of Barclays and JP Morgan and another day of losses for metals’ prices.
“The last five years have been the worst period of performance since 1966. Looking forward it is hard to see what might pull the the sector out of its tailspin. A demand shock seems unlikely given the state of China’s economy, although there are some signs of near-term improvement (money supply (M2), property starts and total social financing). We would have reverted to our Negative call of 2013-14 if it weren’t for the recent pick up in some Chinese data, plus sector positioning),” the team of analysts led by David Butler said in a research note sent to clients.
Three-month copper futures were 1.2% lower – and at fresh six-year lows – to $4,925 per metric tonne on the LME.
Much weaker than expected China CPI prompts talk of further easing

Data released overnight by Chinese authorities said the country’s consumer price index  slowed to a 1.3% year-on-year pace in October (consensus: 1.5%), while producer prices fell at a 5.9% clip, as expected.
Those figures also revealed the first month-on-month drop in consumer prices since May, of -0.3%. It was the 44th straight monthly decline for factory gate prices.
Analysts at Capital Economics said they expected the drop in consumer price inflation to be temporary, pointing out that the bulk of the decline was the result of softer food prices, where the pace of gains retreated to 1.9% year-on-year from 2.7% in the month before.
Similarly, the -5.9% drop in factory prices was mainly attributable to falling commodity prices, the think-tank said, whereas the price of domestic goods was holding up much better than expected.
However, “the window for further interest rate cuts will remain open for some time yet,” Chang Liu, China economist at Capital Economics said in a research report sent to clients.
Policy error by the Fed?
Musing about the ‘market chatter’ surrounding increased expectations for a first interest rate hike from the US Federal reserve in December, Jim Reid at Deutsche Bank said: “We have a bias to believe that a rate hike now would be a policy error mainly because global growth and inflation are so low that you risk activity tipping over into a recession in say 2017. Clearly a lot can happen between now and then but that’s our current thinking.
In the absence of economic data in the UK, markets’ focus was on the letter sent by David Cameron to European Union president Donald Tusk in which he spelled out the country’s conditions for remaining inside the club.
The missive called for curbs on in work benefits granted to EU migrants and less red tape from Brussels.
One dissatisfied Conservative, Bernard Jenkin, angrily stood up in parliament and questioned “is that it? Is that the sum total of the government’s position in this renegotiation?”
Copper giant Anglo American was the object of negative comments out of JP Morgan and Barclays. “We also explicitly assume the progressive dividend is sacrificed at (or before) full year results. With income support expected to diminish, earnings declining through 2016 and management showing little appetite for a more fundamental restructuring of the business, AAL should, in our view, increasingly be viewed as a highly leveraged play on commodities,” the former said.

Barclays slashed its target price on the miner to 485p from 625p.
Experian was at the top of the leader board after reporting first half operating earnings (EBITA) of $570m (consensus: $567m), alongside strong cash flow, according to some analysts. The information services company increased its dividend by 2% and hiked its share buy-back programme by $200m to $800m.
Shares of Vodafone shone after the telecommunications company’s first half results beat expectations and it lifted full year guidance.
Broadcaster ITV gained ground after saying it was on track for double digit profit  growth for the full year as it posted a strong third quarter book.
National Grid advanced after it announced strong first half earnings growth and confirmed rumours that it has begun to look at potentially selling a majority stake in its gas distribution business and returning the proceeds to shareholders via a likely special dividend.
Plumbing supplier Wolseley slid after its first-quarter update failed to impress, while property developer Land Securities was also under the cosh as its interim net asset value per share missed analysts’ expectations.
Shares in engineering giant Rolls-Royce were on the backfoot after Exane BNP Paribas slashed its price target on the stock to 685p from 840p to reflect an additional pullback in the civil aerospace margin and further pressure on shorter-cycle activities.
Supermarket retailers Morrison and Tesco were hit as Deutsche Bank downgraded its ratings on the stocks, with the latter falling to a ‘hold’ from ‘buy’.

Shares in power company Drax slid after Deutsche Bank cut the stock to ‘sell’ from ‘hold’ as the “power price crunch” worsen.
DCC was a high riser after the distribution and logistics group reported an increase in interim pre-tax profit thanks to an improvement in gross margins, although revenue suffered a slight decline.

Engineering software company Aveva gained ground despite swinging to a pre-tax loss in the first half of the year due to declining oil prices , as it said it hopes to reach definitive terms on the reverse takeover by Schneider Electric in December, with completion by mid-2016.

The benchmark Stoxx Europe 600 index closed up 0.10%, while Germany’s DAX rose 0.16% and France’s CAC 40 gained 0.02%.
The euro was on the back foot against the main currencies, sliding 0.55% and 0.48% against the pound and the yen respectively and falling to a six-month low against the dollar, while Brent crude gained 0.92% to $47.63 a barrel.
Miners, which are heavily dependent on demand from China, were under the cosh after the release of data from Beijing.

A downgrade of the European mining sector to ‘neutral’ from ‘positive’ did little to lift the mood, as Barclays pointed out that the last five years have marked the worst performance since 1966.

“A demand shock seems unlikely given the state of China’s economy, although there are some signs of near term improvement,” the bank said.
ECB Weidmann issues low-interest rates warning
Meanwhile, ECB member and Bundesbank president Jens Weidmann dampened sentiment further after talking up the risks that ultra-low interest rates  could present for financial stability.
“Monetary policy bears responsibility for risks to financial stability if they affect the long-run outlook of price stability or our capacity to ensure price stability in the future,” he said.
“In that sense I share concerns about monetary policy that’s too loose for too long.”
In company news, Vallourec slumped 10.2% after the French steel pipe maker posted a third quarter loss amid falling demand from its oil and gas customers and said it does not expect market conditions to improve any time soon.
Swedish carmaker Volvo declined 1.03%, despite receiving a favourable arbitration ruling, which is expected to boost fourth quarter operating profit  by approximately 800m Swedish kronor (£61m).
Dutch electronics group Philips slid 0.34% after announcing it has signed a €225m (£159m) deal with Canada-based Mackenzie Health to install and run medical technologies at in two hospitals in Ontario.

Kaz Minerals and Vedanta Resources were under the cosh after Barclays downgraded its stance on the stocks and the broader European mining sector. The bank cut Kaz to ‘underweight’ from ‘equalweight’, halving the price target to 100p. It said the investment case remains high risk.

Listed funeral provider Dignity was on the front foot again after saying on Monday that it expects to outperform full year earnings expectations “given the continued high number of deaths relative to 2014”. Dignity said revenue for the 39 weeks to 25 September was £227m, up from £196.4m. The number of deaths in the period rose 9% to 446,000

That the international travel sector is, thanks to the Covid-19 pandemic, in a bit... END_OF_DOCUMENT_TOKEN_TO_BE_REPLACED

With a growing number of economists arguing there is a high chance we are... END_OF_DOCUMENT_TOKEN_TO_BE_REPLACED

While most still caveat the argument with the get-out clause it is far from... END_OF_DOCUMENT_TOKEN_TO_BE_REPLACED

Natural gas prices have rocketed with Russia accused of managing supply to drive up... END_OF_DOCUMENT_TOKEN_TO_BE_REPLACED

After their valuations boomed in 2020, the UK’s online fast-fashion giants of Asos and... END_OF_DOCUMENT_TOKEN_TO_BE_REPLACED