The Morrisons share price has added another 1.5%, taking gains for 2021 to 63.7%, after it was announced the long-running takeover battle between rival private equity groups competing for the grocers will go to auction. Competing consortiums led by U.S. private equity giants Clayton Dubilier & Rice (CD&R) and Fortress Investment Group have been making rival bids for the Bradford-based UK supermarket chain for months now. A final decision on the grocer’s new ownership will now, however, be arrived at in a one-day auction.

The announcement was made by the UK’s takeover panel, who said the successful bidder will be determined on Saturday. The two private equity consortiums will go through up to 5 rounds of bidding but they will all take place over the course of one day and deliver a definitive outcome to the saga. 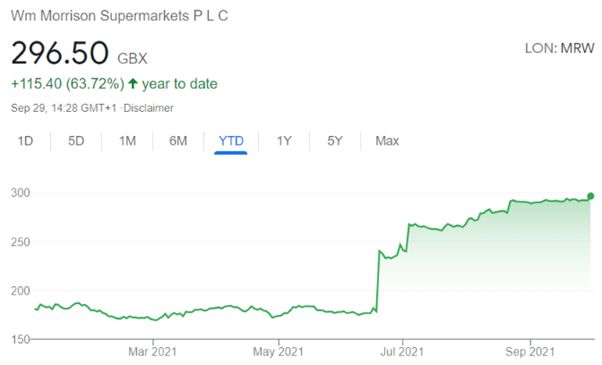 CD&R, which brought in former Tesco chief executive Sir Terry Leahy to front its bid, entered the race for Morrisons in June. Fortress, who are backed by the Japanese investment conglomerate Softbank, entered the bidding in July and thought they had reached agreement on a price of 270p-a-share before CD&R returned with an improved 285p-a-share offer of their own.

The auction process will run on Saturday, unless either of the two bidders makes a “no increase” announcement by 5 p.m. on Friday. The two bidders will then be obliged to announce their final offer by Monday 7 a.m. at the latest. Morrisons must then decide which of the two final bids to recommend to its shareholders by 7 a.m. on Tuesday.

Both of the rival U.S. groups battling it out for the UK’s fourth largest supermarket chain and a roughly 10.5% share of the country’s groceries market have promised to protect the company’s vertically integrated business model, not sell off assets such as supermarket properties on leaseback deals and protect jobs.

Some concern has been expressed over the fact CD&R has set up a corporate vehicle in the Cayman Islands it plans to be the ultimate owner of Morrisons if it succeeds in its bid to acquire it. That could deprive the UK of tax it would otherwise bank from the deal. CD&R have, however, responded that the Caymans Islands vehicle was only established to raise money to finance the deal and that its bid vehicle would