The board of Morrisons yesterday switched horses to back a new, improved 285p-a-share bid made by American private equity firm Clayton, Dubilier & Rice (CD&R). The board had previously recommended shareholders accept a lower 272p-a-share bid by a rival U.S. private equity consortium led by Fortress. The new bid values the company at a total of £9.7 billion, including debt, with a £7 billion purchase price.

Fortress had initially offered 254p-a-share before improving the overall bid by £400 million in an effort to discourage rivals for the UK’s fourth-largest supermarket. CD&R sparked the bidding war back in June with an opening offer of 230p-a-share, which was thrown out by the board but drew out Fortress’s higher offers. 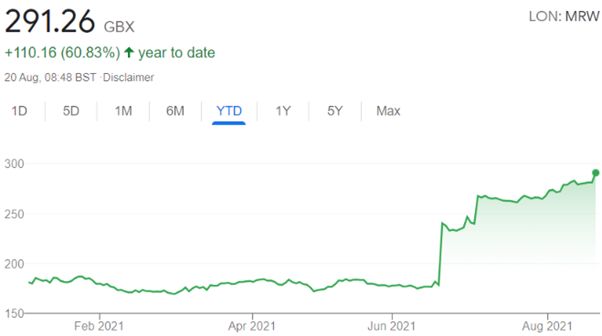 The Morrisons share price rising to 291.26p in early trading this morning, 6p more than CD&R’s offer, suggests markets believe there is a chance of Fortress, or a new bidder, upping the ante again.

The CD&R offer, which also includes a promise to protect the grocer’s vertically integrated business model, which includes supply chain assets including food manufacturing plants, abattoirs and even a trawler, is leveraged by debt provided by debt put up by Goldman Sachs, BNP Paribas, Bank of America and Mizuho Bank. Of the cash put up, CD&R will use money raised by its most recent fund as well as contributions made by alternative investors West Street Strategic Solutions and Ares.

CD&R’s new bid came ahead of a deadline of today set by the Morrisons board and Takeover Panel to improve their bid or walk away from negotiations. The latest offer represents a 60% premium on the Morrisons share price ahead in June before takeover interest first became public.

The private equity group has also promised to protect the employment of current staff, saying it doesn’t expect to make any significant changes to employee numbers if the bid succeeds. It has also committed to maintaining pension rights. CD&R have also reassured shareholders and management mass store sales and leasebacks, another worry under new owners, is not part of the strategy.

“is a particular strength of the business which has been carefully preserved over many years and will continue to be a cornerstone of Morrisons”.

The bid document said any decisions on changes to the supermarket group’s vision and strategy would be informed by a review conducted by the existing management team “with the close collaboration and input of CD&R”.

Potential synergies with the MFG fuel forecourts business, the UK’s largest and also owned by CD&R, is also mentioned in the bid’s documentation.

“CD&R will be a responsible, thoughtful and careful owner of an important British grocery business.”

The board has said it will unanimously recommend the new CD&R bid and a shareholder meeting to vote on it has been scheduled for the week beginning October 4th. Fortress last night said it was considering its options, which could potentially see it increase its offer in response.