Marks & Spencer (M&S) today announced that chief executive Steve Rowe is to step down with Katie Bickerstaffe, currently in charge of the retailer’s clothing & home division, international and online MS2 ecommerce operation stepping up to become the company’s first female boss. She will become co-chief executive, sharing the role with Stuart Machin, who is currently heads up M&S Food.

Mr Machin will hold the chief-executive title and have responsibility for the business’s day-to-day operations, executive committee and continue to oversee the food division. Eoin Tonge, currently M&S’s chief financial officer, will also take the new title of chief strategy officer in addition to his current role. All three were considered to be in a three-horse race to take over from Mr Rowe, who originally joined the company at the age of 15, working at M&S Croydon. 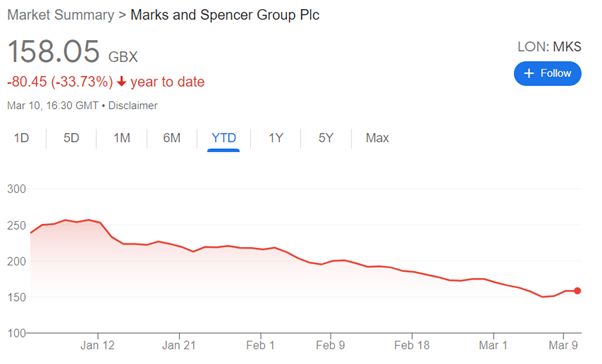 Mr Rowe become chief executive six years ago and has been leading M&S’s most recent turnaround plan, focused on modernising a business that has suffered from years of decline. With the usual term of a chief executive between five and eight years, there has been speculation since last year that Mr Rowe’s tenure may come to a natural conclusion either this year or next.

“It has been an enormous privilege to lead the business I love and have spent almost all my career working for. Leaving will be in many ways very difficult for me but I feel that after six hard years it is the right time to pass on the baton.”

“I feel that we have done many of the hard yards to restore the business to what it should be. I’m proud that I am leaving a very strong team who will lead it into the next growth phase. I wish them every success.”

Despite the fact M&S’s market capitalisation had fallen by two thirds since Mr Rowe took the reigns, he is credited with driving through long overdue decisions and changes to strategy such as shutting underperforming locations, overhauling logistics and belatedly investing in an ecommerce presence. He was also a driving force behind the so-far successful joint venture with Ocado to take the company’s groceries offering online for the first time.

However, despite impressive share price growth over the second half of last year, M&S has again seen its valuation in the doldrums in 2022, weighed down by fears over the long term impact of Brexit and inflation concerns. The M&S share price is down almost 34% since the beginning of the year.

The M&S chairman Archie Norman explained the decision to opt for co-chief executives to replace the outgoing Rowe with:

“The appointments we are making bring together a very strong leadership team to take the business into the next stage of its transformation. Both Stuart and Katie are outstanding, high-impact leaders with very strong track records and experience of leading businesses through transformative change.”

“With Eoin, they make a very powerful leadership team able to span the full breadth of our businesses. Given the very strong recent progress we have made, keeping up the pace and momentum is critical.”

Analysts were less convinced with splitting of the chief executive role and seeming move to placate Mr Tonge for missing out by giving him an additional title and responsibilities. Nick Bubb, an independent retail analyst, is quoted in The Times as commenting the new positions announced were “not just a fudge, this is an M&S fudge”.

Despite the poor share price performance under his tenure, the chairman Mr Norman paid tribute to his work today, saying:

“Steve has been a magnificent servant of M&S, putting his heart and soul into the job. Coming from the shop floor to lead the business, he epitomises our values and has lived and breathed M&S for so many years. The M&S he took over was in parlous shape and throughout my tenure he has been fearless in grasping the nettles and facing into the challenges, and has delivered massive progress.”

“As we move into the next growth phase, he leaves a very strong team to take the business forward. But as someone who has touched so many colleagues across the business over the years, he will be much missed, and he goes with our huge affection and best wishes.”