In a break from the recent pattern of profit warnings, Marks & Spencer this morning announced it is upgrading its guidance of expected profits, sending the share price soaring by over 10% in early trading. The M&S share price has now gained over 20% since the beginning of the year.

Thanks to a strong performance by its e-commerce division and a boost from the end of social distancing restrictions across the UK, M&S now expects adjusted pre-tax profits for the year to come in ahead of earlier guidance of between £300 million and £350 million. The retailer banked just £41.6 million in annual adjusted profits for the year to May. 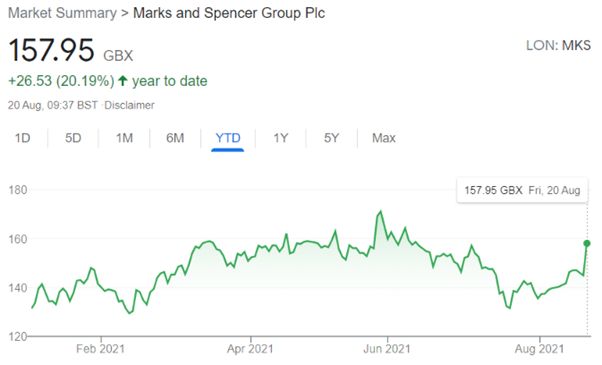 The new optimism is, however, reliant on no new pandemic restrictions being introduced over the rest of the financial year. Frasers Group, which owns the House of Fraser department stores and Sports Direct sporting goods chain, has by contrast downgraded forecasts this week on the expectation of new lockdown restrictions being introduced at some point.

However, many experts don’t think M&S is being overly optimistic. Jefferies analysts wrote in a note to investors the new guidance

“still looks conservative to us and food market share gains ahead of a full recovery in workplace mobility is especially supportive of a more fundamental debate on the stock”.

Even M&S’s clothing business, a long-term drag on overall company performance, is showing signs it could finally be making progress in its efforts at a turnaround. Sales are up 92.2% on last year and only 2.6% shy of 2019 revenues despite drastically lower footfall. Over the 19 weeks to August 14 online sales across clothing and home ranges improved by 22.2% on last year and an impressive 61.8% on 2019. Online now accounts for 35% of total clothing sales, demonstrating the importance of M&S shaping up on their e-commerce offering. Shop sales were down around 20% with city centre locations worst affected by the pandemic due to a massive drop in office worker and tourist footfall.

A particularly successful initiative has been the addition of a stable of curated third-party clothing brands now being sold at M&S under “Brands at M&S”. Current fashion brands include Seasalt, Nobody’s Child and White Stuff, which have succeeded in attracting younger shoppers, where attempts to modernise M&S’s own lines have failed in the past. However, there have also been encouraging signs new, younger buyers are being enticed by new own-brand womenswear ranges.

The company also last month announced plans for a new same-day delivery service to launch from the beginning of next year as it makes concerted efforts to belatedly compete online.

In contrast to supermarket competitors, whose food sales benefitted from lockdown conditions and are now expected to suffer a slowdown as people return to the office, M&S expects to benefit. Much of its food sales rely on office workers picking up lunches or ready meals to take home from city centre locations. That’s already feeding through to food sales that were up 10.8% over the 19 weeks to August 14 and 9.6% up on the same period in 2019.