The Marks & Spencer share price is up 6% today, despite the high street retailer posting its first loss in its 94 year-history. However, investors were encouraged by restructuring progress being made, soaring food sales and a promising start to its tie-up with online groceries delivery specialist Ocado. However, strong growth in profits generated by the company’s food division were wiped out by a £107.5 million operating loss before adjusted items from the clothing and home business. 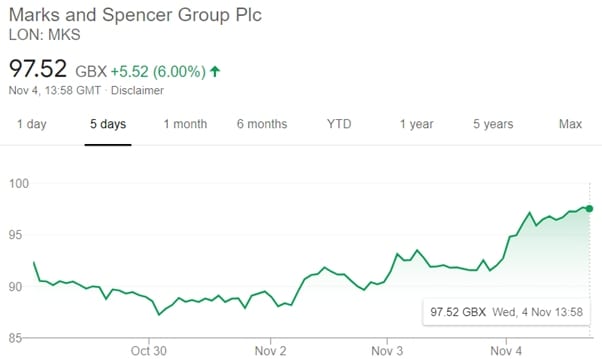 An over 40% drop in clothing and home sales, which totalled £917.2 million over the 26 weeks, or half year, to September 26th, means the company’s food business made 300% more than it did over the same period last year. Despite the negatives, M&S confidently stated its transformation strategy had led it to a “robust performance” over the period.

An overall statutory loss of £87.6 million was posted for the period, compared to a £158.8 million profit a year earlier. M&S’s total group sales were down 15.6% to £4.1 billion. Despite the fact cafes were closed for an extended period and the loss of office footfall badly hitting many branches of its Simply Food brand, like for like sales for the food business were up 2.7% over the half year. M&S is the UK’s largest sandwich retailer by volume.

“In a year when it has become impossible to forecast with any degree of accuracy, our performance has been much more robust than at first seemed possible . . . Out of adversity comes opportunity and, through our ‘never the same again programme’ we have brought forward three years’ change in one to become a leaner, faster and more digital business.”

M&S currently operates 1,035 stores and employs 72,000 staff in the UK after 7000 jobs were cut in August as a response to changing consumer tastes and a desire to introduce new, more efficient ways of working.

Falling sales of quick breakfast, lunch and snack items normally popular with office workers confined to home office work for months on end was compensated for by a leap in online orders of flowers, wine and hampers. The food division’s total operating profit came in at £109.7 million, compared to £92.2 million over the same period last year.

The new partnership with Ocado, which saw M&S acquire a 50% stake in the online groceries ordering and logistics technology company’s UK retail operations, was billed as having gotten off to an “overwhelmingly positive” start. Ocado switched to supplying M&S products from those of Waitrose, its previous partner, in September.

Online sales grew 47.9% over the period, hitting £1.16 billion. However, most of that increase came before the start of the Ocado partnership, which only came into effect at the tail end of the period covered. However, having acquired 50% of Ocado’s retail business earlier than that, M&S benefitted from a £38.8 million share of its total £77.6 million profit after tax.

Clothes and home sales were down a massive 61.5% over the first quarter, while many stores were closed for a period. The second quarter was an improvement but still showed a 21.3% drop on last year’s trading figures. High street locations continued to have lower footfall once lockdown was listed and there was minimal demand for more formal workwear and outfits for social occasions such as weddings.

Online clothing sales were, however, up 34.4%, which saw M&S overtake Asos as the UK’s second most visited clothing website, behind only Next. A new division ‘MS2’ has been set up as a ‘pure play’ online retailer with a focus on social media-based selling. MS2 will sell a “curated portfolio” of third-party brands, including the vintage-inspired Nobody’s Child.

Covid-related costs, tied to making stores, offices and logistics facilities safe for staff and customers, and losses incurred during lockdown when many stores had to be wholly or partly closed, came in at £67.9 million. £56.1 million of that was offset by government support packages including the furlough scheme and business rates relief.

The clothing and home business is expected to again be hit by the second lockdown now coming into effect, but M&S declined to forecast the value of lost sales. However, it is investing in ramping up capacity by 30% at its Castle Donington online retail logistics base in anticipation of an ecommerce-focused Christmas period. A “book and shop” app has also been launched that will allow customers to book a shopping time, to spread footfall and negate the risk of being in a busy store. New product lines will also take into account smaller family gatherings at Christmas.