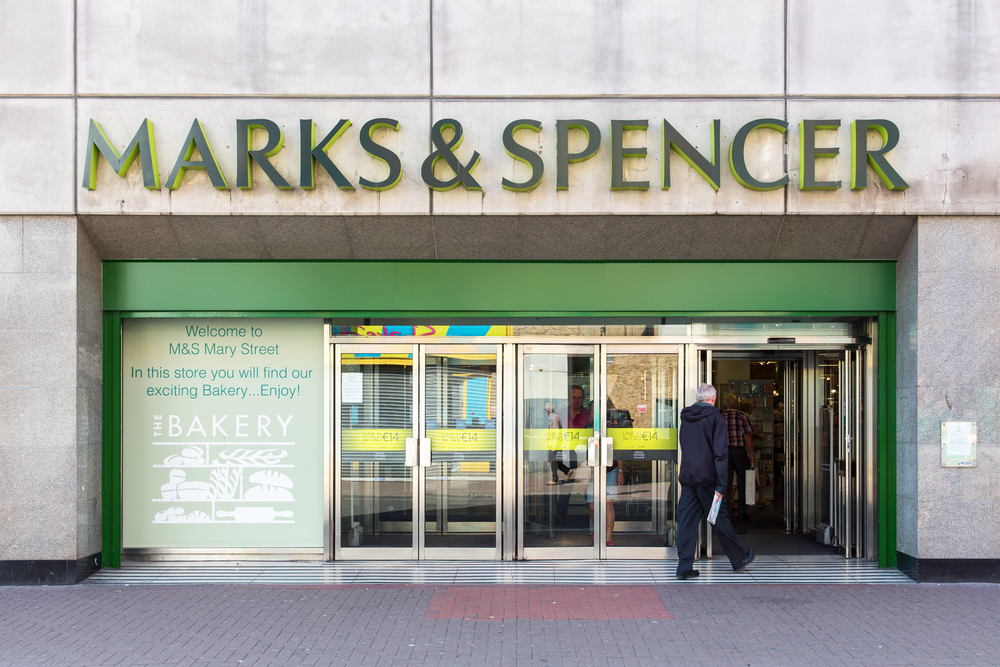 The Marks & Spencer share price has surged by almost 16% today to take gains for the past 12 months to 87% after the London-listed high street retailer dramatically raised its profit guidance. A profit upgrade will be more than welcomed by shareholders after downgrades had become common over recent years. And it was one that was worth the wait with guidance upped by over 40% thanks to impressive food sales and a long-awaited upturn in clothing sales.

The company said that it believes pre-tax profits that are now expected to register “in the region of £500 million” demonstrate the “hard yards” of its turnaround have now been realised and are beginning to bear fruit. 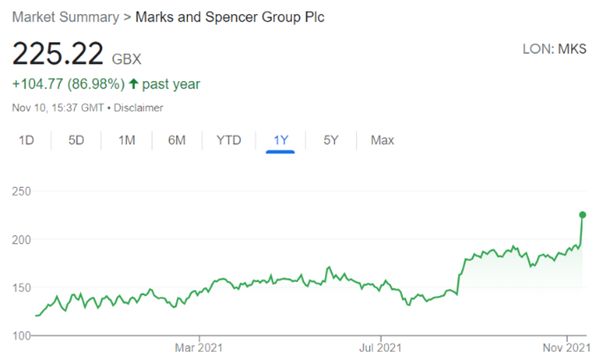 M&S investors have become far more used to profit warnings from the retailer as its clothing business lost market share despite repeated and often expensive attempts to overhaul it by updating lines and launching high profile ad campaigns fronted by popular celebrities.

Today’s new upgrade, especially its extent, is a particular surprise given that M&S had already issued a profit upgrade in July, the first this century. At the time headline profits were forecast to come in at the top end of a previously issued range of £300 million to £350 million.

Marks & Spencer issued its improved forward guidance alongside its half year report covering the six months to October 2nd. The performance over the first six months of the financial year showed a 52.8% surge in headline profits to £269.4 million when compared to the same six months in 2019. Last year, not considered a worthwhile comparison by most retailers, saw a £17.4 million loss booked as the company grappled with the impact of the Covid-19 pandemic. Statutory pre-tax profits also came in around 18% up on those of 2019 at £187.3 million to £158.8 million.

The M&S turnaround has been led by chief executive Steve Rowe since 2016 and he commented this morning:

“Given the history of M&S we’ve been clear that we won’t overclaim our progress. But, thanks to the hard work of our colleagues, it is clear that underlying performance is improving, with our main businesses making important gains in market share and customer perception. The hard yards of driving long term change are beginning to be borne out in our performance.”

Despite positive progress for the clothing business, M&S’s growth has been mainly driven by growing food sales, which were up 10.4% compared to the first half of 2019. Most retailers sold more food than normal last year during lockdown periods which saw people work from home and restaurants closed. As a result, households used to members eating meals like lunch, and often breakfast, at work or college etc., or occasionally eating out at bars and restaurants, started eating almost all their meals at home, necessitating larger shops.

M&S’s food model is different. Stores are mainly found in city centre locations or in transport hubs such as train stations and airports and cater to people in transit between the home and office or grabbing lunch while at work. That saw food sales hit heavily by the pandemic and now enjoying a recovery as people get back to work.

Operating profits from the food business were up 56% compared to 2019 despite footfall in shops still being 18% lower than pre-pandemic levels. Fewer customers have, however, been compensated for by those who do come into an M&S food court spending more money. Basket value was up 36% in a vindication of the strategy to offer upmarket readymade meals that can be picked up for dinner on the way home.

The business also brought in £28.1 million as its share of the profits from its joint venture with online grocer Ocado.

That the international travel sector is, thanks to the Covid-19 pandemic, in a bit... END_OF_DOCUMENT_TOKEN_TO_BE_REPLACED

With a growing number of economists arguing there is a high chance we are... END_OF_DOCUMENT_TOKEN_TO_BE_REPLACED

While most still caveat the argument with the get-out clause it is far from... END_OF_DOCUMENT_TOKEN_TO_BE_REPLACED

Natural gas prices have rocketed with Russia accused of managing supply to drive up... END_OF_DOCUMENT_TOKEN_TO_BE_REPLACED

After their valuations boomed in 2020, the UK’s online fast-fashion giants of Asos and... END_OF_DOCUMENT_TOKEN_TO_BE_REPLACED