Musk leaves door open to increase Twitter stake above 14.9% after board seat rejection

The offer was made on the condition that Musk does not increase his stake to above 14.9% of the company. Him turning down the proposed seat has been interpreted as him leaving the door open to building a larger ownership stake. He is currently the largest individual investor in the company. 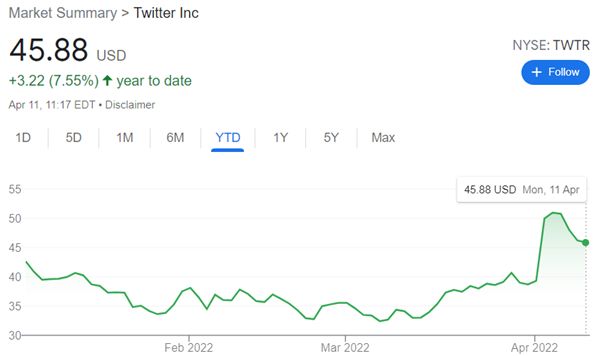 Twitter chief executive Parag Agrawal commented cryptically that the rejection of the offer by Musk was “for the best” and said he would “tune out the noise”.

That noise has already risen in volume with speculation rife Musk could now be planning a hostile takeover.

The Twitter share price has already benefitted from Musk’s high profile involvement, gaining almost 18% last week after news of the stake broke. While the company’s microblogging platform is extremely popular with high profile politicians, professionals, celebrities and the general public it has also faced criticism over its approach to free speech. Former U.S. President Donald Trump was banned from the platform.

Investors have also never been quite convinced at Twitter’s monetisation strategy, with revenue growth lagging other popular social media platforms. The company was founded in 2006 and went public in late 2013. Co-founder and former chief executive Jack Dorsey stepped down from an active role at the company last November.

In the provocative manner he has become known for, Musk spent the weekend sharing ideas, or suggestions, about how Twitter could improve as a company. One post promoted a poll that asked Musk’s followers if the company’s San Francisco HQ should be converted into a homeless shelter because “no one shows up there anyway”.

Last week Musk published another poll asking followers if they think Twitter should allow tweets to be edited after they have been posted. In a sign that the company is taking his meddling seriously, chief executive Agrawal told Twitter users to “vote carefully” on the question as it would have “important” consequences. 4.4 million votes were cast with 74% in favour of an edit function being introduced.

Musk has also said he believes Twitter should shake up its premium subscription service Twitter Blue with an advertising ban and price cut. His argument for the former was

“the power of corporations to dictate policy is greatly enhanced if Twitter depends on advertising money to survive”.

Currently the price of Twitter Blue is $2.99 a month with Musk suggesting

“price should probably be ~$2/month, but paid 12 months up front & account doesn’t get checkmark for 60 days (watch for credit card chargebacks) & suspended with no refund if used for scam/spam.”

The premium Twitter Blue service launched in the USA, Canada, Australia and New Zealand in June last year but is yet to be made available in the UK.

Wedbush Securities analyst Dan Ives compared Musk’s involvement in Twitter as one he believes will descent into a “Game of Thrones battle” with a “high likelihood” the world’s richest man will now take a more aggressive approach:

“Musk no longer joining the Twitter board could lead to a host of scenarios including 1) joining up with a private equity partner and forcing major strategic changes at Twitter and/or a sale, 2) creating more noise and angst for Twitter board/execs with various proposed platform changes, or 3) does Musk say ‘game over’, reduce his stake and go home.”